I finished! (pretty much)

With the exception of donating blood (I'll put that one on my list of goals for next year), I finished my goals for my 30th year! With not a day to spare. I meant to finish last week, but I started getting sick the day after Christmas, and I ended up getting a raging sinus infection. I spent almost three solid days in bed while the amazing Chad held down the fort and took care of all the chores. I was able to work on a couple goals while still abed, and the rest I finished last night and today!

I finished sketching out my rough draft. It's a story about a "secret superhero" named Mason, and his little brother Lincoln.

#19: Write a thank you note to someone from my past

I emailed one of my oldest and dearest friends, one who I don't never get to see, thanking her for so many fun memories (I itemized some of the ones that stuck out to me).

This one was easy to do; it was left to the last minute because I just kept forgetting. I paid for the car behind me in line at the Church's Chicken drive-through. The employees were very impressed, and asked if I had done the same thing about six months before (I guess someone else had the same idea!)

#9: Take an inventory of my food storage

We've been depleting our food storage this year, and not stocking up on purpose, anticipating moving in the future. But it's good to know where we're at with our stores, and I look forward to getting our storage organized in our next house.

This was not a complicated process, but it was a completely foreign one. I had to buy rennet and cheesecloth. I haven't eaten any of the finished product yet. It looks strange. As I was making it, Bree declared that it smelled disgusting, and Mason said it looked like barf. At least I only made half a batch!

This was fun. It felt really weird to drop raw dough into simmering water. They smelled delicious baking, and taste very similar to the wheat bread I make (I substituted half freshly-ground wheat flour in the recipe). Mason ate two while they were still hot from the oven. I'm excited to try one toasted, with cream cheese and jam--my favorite way to eat a bagel. 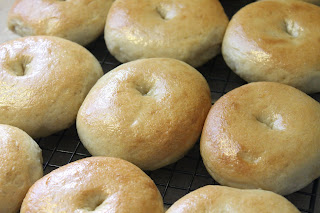 Email ThisBlogThis!Share to TwitterShare to FacebookShare to Pinterest
Labels: Goals

That is inspiring :)
Did you ever taste the cottage cheese?