I've been a little preoccupied lately with our most recent acquisition: a camping trailer. We got it for free, and all we have to do now is make it liveable (or, really just campable). As you can see, we've already started taking things apart, vacuumed all rodent evidence away, and disposed of mattresses, carpet, and hideous window coverings (oh wait, those are still there in these photos). 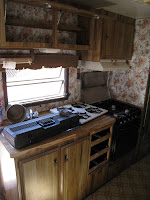 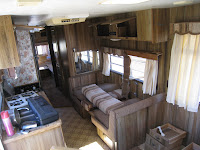 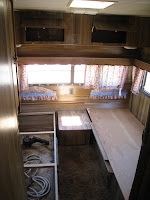 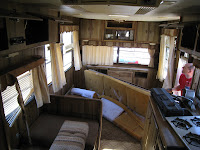 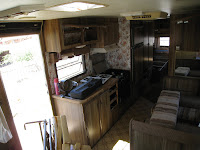 It's actually a really big trailer: 28 feet, so it's bigger than our family really needs, but it will sleep all of us when our family is full grown (or we can camp with friends--Tombstone with the Leas, here we come!). Diagnostics have been reassuring so far: the electrical all seems to be working, the A/C actually cools, and the water pump works. Chad and I know absolutely nothing about the technical side of maintaining an RV, so we've got to get a manual or something. But one thing I do know how to do is make things look pretty. So for the last couple days I've been working on reupholstering the futon and banquette. I got some great fabric for $3/yard, and so far I'm half-way done with the banquette cushions (Why do my ribs hurt? Some weird pregnant thing that happens when you hunch over all day?). Tomorrow we're off to Phoenix to pick up our carpet and linoleum tile, new skylights, new locks and door handles, new shower hardware, a few lights, a manual and some other odds and ends. We're actually having fun doing this. I can't wait to see the finished product!
Posted by Megs at 10:07 PM 6 comments:

I don't know how many long months it's been since we had a run of successful Cookie Days. I REALLY missed it! Well, Joanna and Sarah not working right now, Mackenzie's baby boy is a healthy 2 months old, and Amy and I are no longer in the RS Presidency, so I figured there were no more excuses. I hosted today, and I really enjoyed having that sorely-missed girl time enhanced by sugar-filled treats! So check out our Cookie Wednesday Blog for the delectable details. And now, to finish off the left-overs...
Posted by Megs at 4:09 PM No comments:

When Jaime, the kids, and I were on our way home from Logan, we passed through Provo and stayed the night with my brother Adam and his wife Heather (We also saw my amazing friend Mackenzie, but I'll post more on that when I get the pics). That evening we all went to Applebee's for dessert. While we were waiting for our food, the manager came around to ask us how we were doing (that's Applebee's thing: the manager has to visit your table or you get a free meal gift card), and he happened to be black. Who would have thought that Bree's first encounter with a black person would be in Provo?! It's not like Bree has only seen white people in her life. Globe is a very healthy mixture of white, Mexican, and Apache. But Bree could only silently stare at the manager with nervous curiosity as he asked her if she was happy (head-shake "no"), if there was anything he could get her ("no"), if she'd like some free fries or applesauce ("no"). After he left, Bree said, "I don't like that guy. He's too brown." I know I shouldn't have laughed so hard at something so inappropriate, but I couldn't stop. With tears running down my cheeks I tried to get her to see things logically, pointing out how nice "that guy" had been, wanting to make sure she was happy, and that everyone has different colored skin. Later, after we had our ice cream, the manager came around again, and we all held our breath when he asked Bree if she was happy now. Thankfully, she nodded and smiled at him through her mouthful of strawberry sundae. Sigh, happy ending.
Posted by Megs at 10:52 AM 5 comments:

When you live in a town like Globe, your kids are naturally deprived of fun things like parks that have interactive fountains and sprinklers. It was so fun to watch Bree experience something new and exciting. She keeps asking if we can go again. Who needs Disneyland? 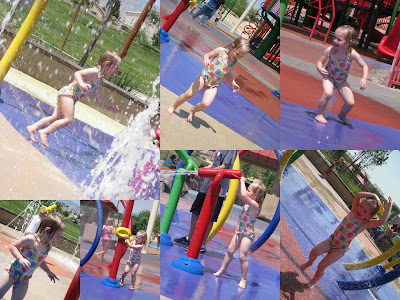 Email ThisBlogThis!Share to TwitterShare to FacebookShare to Pinterest
Labels: Vacations

After flying to Vegas, Bree and I drove to Logan, Utah with my friend Jaime and her baby Zackary. We stayed with our friend Rachel at her sister's house, along with her mom and other sister, and their 8 combined kids. The house was huge, and our beds so comfy, and the kids had a blast playing in the huge backyard. We moms spent time scrapbooking and playing games. We had such a fun time, and really enjoyed the cooler weather. One morning, the kids put together a dance performance, complete with refreshments for sale. I was impressed at how long Bree followed the dance moves along with Rachel's four kids. Maybe it's time to enroll her in dance!

Email ThisBlogThis!Share to TwitterShare to FacebookShare to Pinterest
Labels: Vacations

During our trip to Logan, Utah, I discovered that Bree is a great travel companion. She is easily amused by little things, so riding on an airplane was huge for her. She enjoyed a TCBY cone as we waited to board our plane. She wasn't a bit nervous to walk down the gangway and step through the flight door. She looked and laughed as we took off. Then she said, "Bye, Captain!" to the male cabin steward as we got off. What an adventure! 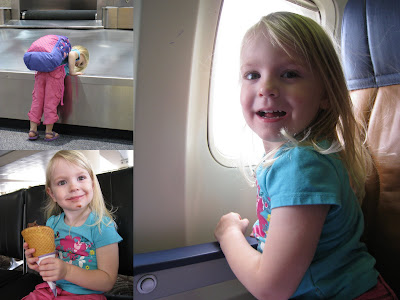