We started off the month with me going on a ride-along with Chad. He's been doing this job for almost seven years, and this is the first time I've seen him in action. I guess I waited so long for a few reasons: I was worried I'd witness something scary that would freak me out and have me worried more for him when he's working, I didn't want to pay for a babysitter, I get carsick, etc. But I gave in, called a sitter, and dubbed the first Saturday in November "date night" at work. I actually really enjoyed it. We didn't see anything crazy or scary, but I did get to see my man act all in charge and authoritative, but in a very polite manner. He's good at what he does. And we got to eat dinner together, which made the date night official. 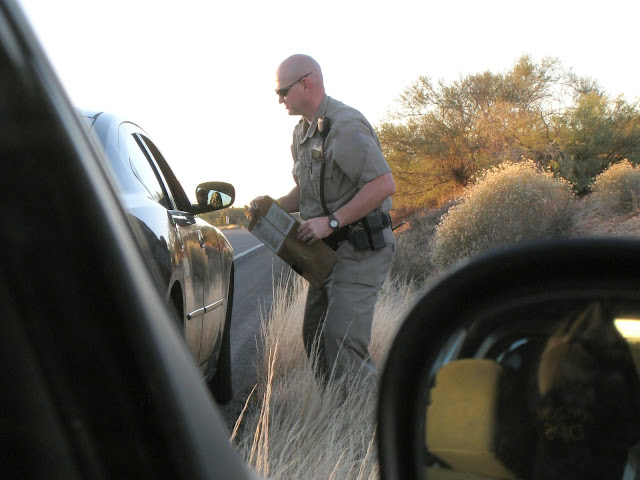 Fall officially arrived with a glorious weekend of 40-ish weather! It was an occasion for jackets, scarves, tights, and boots--all at the same time. I was in heaven...for that weekend at least, because it was back into the mid-70s the following week. But it gets gradually cooler every day 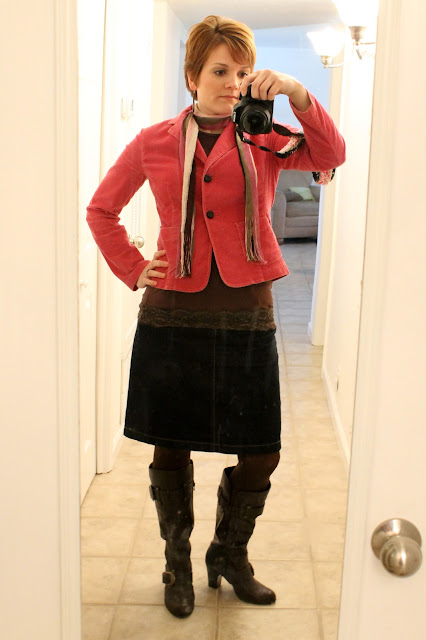 Bree lost her first tooth! It was literally hanging out of her mouth, and she was playing with it constantly. One day during school, I was getting so annoyed because she couldn't keep her fingers out of her mouth. I offered to pull it out for her, and she didn't exactly say no. She actually just looked at me skeptically, which I took as a yes. So I yanked it. She gave me a look as if she had been mortally wounded, and her feelings had been seriously hurt. "Ow! That hurt!" I handed her a tissue, reassured her that it would stop bleeding really soon, and told her to get back to her school work. She soon got over the insult, because she quickly discovered a slew of new tricks she can do with a gap in her teeth (poke the tip of her tongue through, breathe through it, drink through a straw, etc.). And the tooth fairy did not disappoint.


Chad and I celebrated our birthdays quietly. I made him chocolate lava cake, which, for future reference, is hot enough to melt a birthday candle, resulting in a cake with a beautiful gooey center laced with green wax. Surprise, surprise. But he ate it anyway, despite my offer to swap with him. That's love. 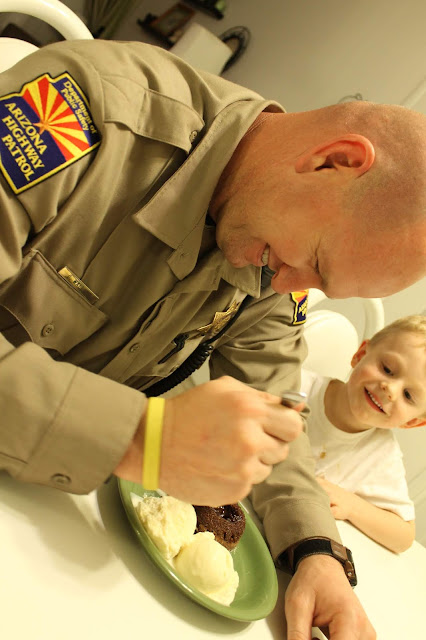 Chad made me waffles for breakfast the next morning for my birthday. And while he was at work that evening I got a sitter for the kids and went to see the final Twilight movie with a couple girlfriends. Going out with the girls is not something I get to do often enough, so it was a really enjoyable way to spend my birthday evening. The movie was decent too.

We've had to limit Mason to one hour of video games a day. He is like a crack addict. His first question to me each morning is "Can I play Mario Brothers/Lego Star wars?" He is often dressed with teeth brushed before I even get going in the morning, because he knows those are prerequisites to game time. I limit game playing because of the mental/emotional effects of too much play time, but the fact that gaming is a sedentary activity doesn't even come into it. Mason is literally incapable of sitting down while playing. It's impossible to play alongside him, because he can't stay out of the way.

Goal #22: Invite someone I'd like to know better over for dinner
This technically happened in October. On Halloween night, we made chili and cornbread, and invited my friend Mackenzie and her family over after we trick-or-treated downtown. Mackenzie and I know each other really well, but I haven't spent much time with her husband Aaron. I think this was only the second time we've had them both over! Shameful. Chad and I both agree that Aaron is good company. We should totally hang out again, before another two years goes by.

Goal #20: Turn off all electronics for 24 hours
This was not nearly as difficult as I thought. I purposely chose a Sunday, and a day when Chad would be working (because he wasn't enthusiastic about the idea). I was worried we'd have trouble filling the time. I could have done without the 50 or so requests to watch a movie (we are apparently addicted). But I played a few board games with the kids, which they loved because we don't do that often. Then I had to declutter the house a bit in preparation for a session of sugar cookie making (I have a hard time starting a new mess-making project when the house is already a disaster). So, once the house was passably clean, I mixed up some dough. The whole process of mixing, rolling, cutting, baking, frosting, and cleaning again took about 3 hours. It's a big process even without kids "helping." I even let Mason use some non-traditional cookie cutters (a "W", an "8", an ice cream cone, etc.), but had to stop him before he dirtied every cutter in the 100-piece Farberware set. Mason's decorating technique consists of squirting a blob of frosting and adding sprinkles to one cookie, then immediately eating it. He repeats this until he is sick to his stomach, then gives up on the whole thing. Bree actually stuck it out until every single cookie was frosted. She really gets into the creative stuff. 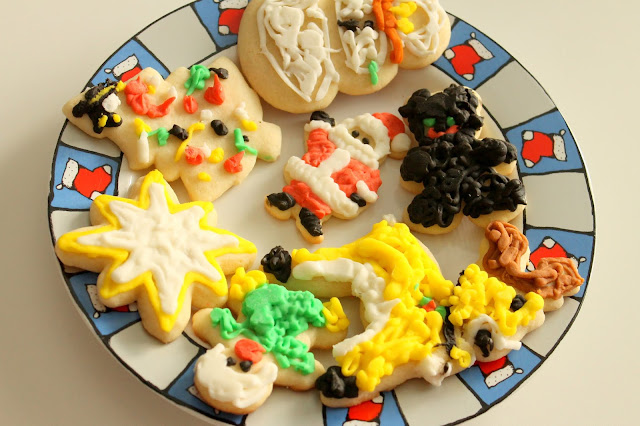 We had Thanksgiving at my grandparents' ranch this year. It was definitely the most delicious family meal we've had there--and there was a ridiculous amount of food. I am talking ridiculously ridiculous. We returned to my mom's house with two pies that had gone completely untouched because there were so many desserts. All the dishes were really tasty.

While we were out there, we took some family snapshots in my grandpa's horse corral. I'm sure he thought I was out of my mind, raking horse manure out of the way, posing in front of the 100-year old fence.  But I had a vision, and I think we captured it. 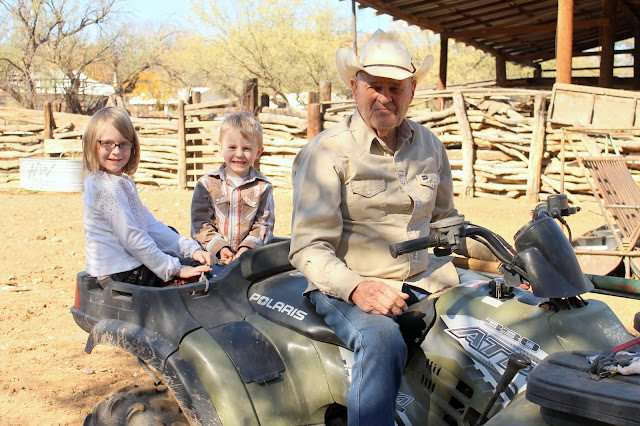 The Christmas movie watching is well underway. So far we've watched:
Oh, and our Elves have recently been coming to life at night. And though I've reminded the kids that the elves keep on eye on them for Santa, Mason assures me that the elves actually can't see him when he's sleeping, because, as he's stated before, he sleeps with his eyes open, and he's never seen them in his room at night.The kids have gotten a kick out of waking up to see the elves playing tic-tac-toe, reading tiny board books, and hanging from kitchen cabinet knobs. They've been waking us up in the mornings in their excitement to report on the elves' latest antics.

Yes, the end of November is Christmasy around here. I like it best that way.
Posted by Megs at 10:50 PM 3 comments:

This post was originally intended to be an 18-month update...that is indicative of how things have been around here lately. We're busy, I didn't have recent photos, etc. Actually, Lincoln started doing some really awesome things AFTER the 18-month mark, so this post is much more impressive than that other one would have been. 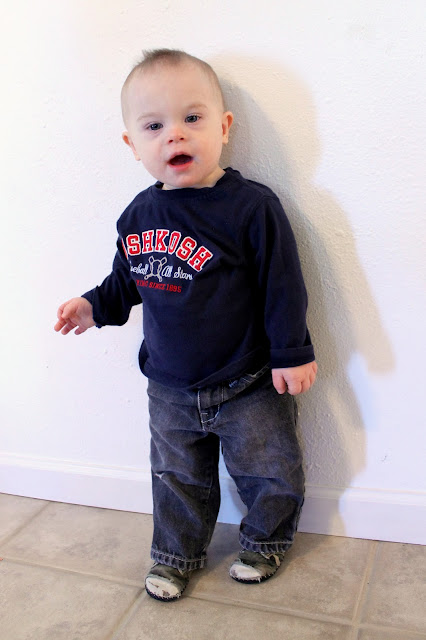 The details:
Lincoln is still a snuggly little baby. I am loving the extra time I get to enjoy him when he's still small. He gives the best hugs, and I can't get enough. It makes everyone else in the family jealous. He is the center of our family; I can't imagine us without him.
Posted by Megs at 5:49 PM 2 comments:

BREE: Christmas isn't about the presents. It's about family, and love, and Jesus' birth.

MASON: Jesus lives at the South Pole. And sometimes, he's at the Bass Pro Shop.

MOM: I think you mean Santa.

MOM: And the North Pole.


SCENE VIII
Bree, upon seeing a picture of Barrack Obama, and being told he just got re-elected.

BREE: For a president, he's just not that smart. He should go to president school. Why don't they have those?

Portrait of a 4-Year-Old (third installment)

MOM: You don't have to finish that second burrito. Make sure you listen to your tummy, and stop eating when it tells you to.

MASON: But I just can't stop eating--it tastes so good!

MOM: No. Tomorrow is Friday.

MASON: You mean the next day?

MOM: Yes, the next day is tomorrow.

This was the first year that Chad has been able to spend Halloween with the kids and me. He has always been working in the past! He was very excited. We kicked off the festivities with pumpkin-carving. Chad helped Mason carve the alien he wanted, and I helped Bree with her dog jack-o-lantern (I thought her Doberman choice was interesting, given all the options). 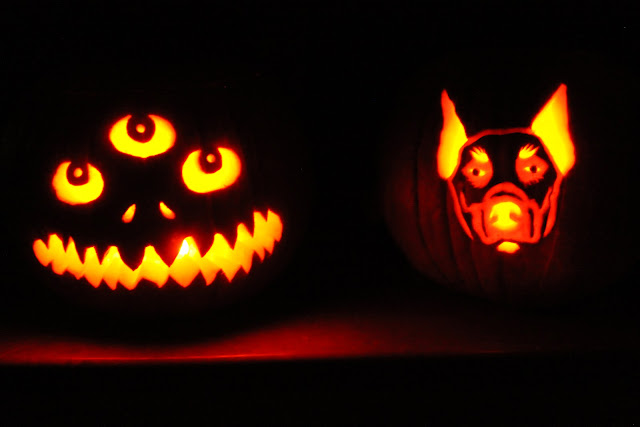 We went downtown again for trick-or-treating, because it was such a hit last year. Local businesses hand out candy that either they or local residents have donated. It's a nice leisurely walk up and down main street, which is blocked off to traffic--a huge bonus when you have a Mason in your family. And in less than an hour, your candy bag is full! 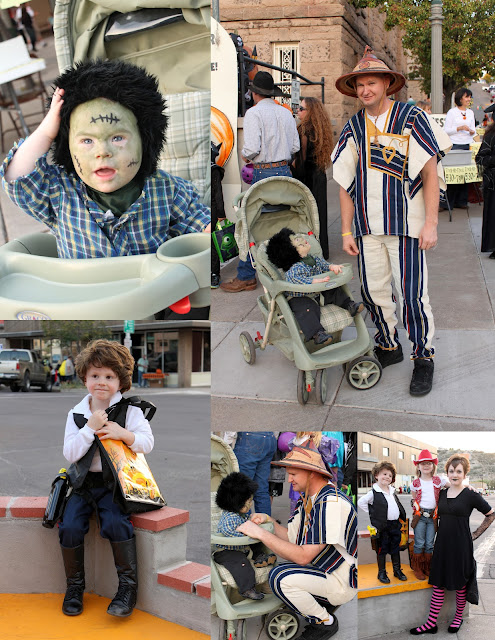 Costumes this year:
Lincoln: Frankenstein
Mason: Han Solo
Bree: Cow Girl
Me: Vampire whose cheap teeth fell out and got lost (so I looked like a goth in everyday attire)
Chad: uh...resident of West Africa (wearing clothes from his mission) 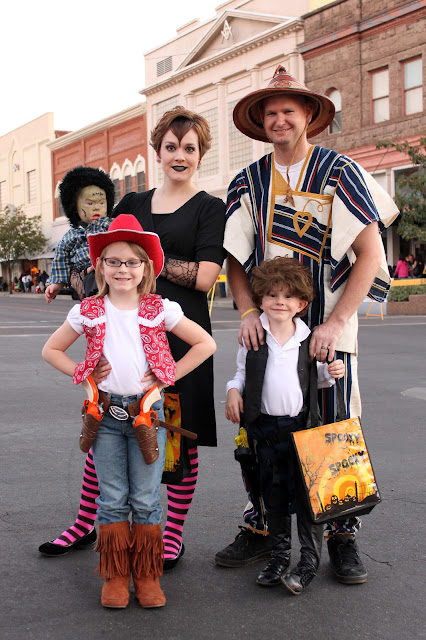 We met up with my friend Mackenzie and her family for trick-or-treating, and we all enjoyed Chad's delicious chili, cornbread, homemade pumpkin donuts, and hot chocolate back at our place. The kids all enjoyed running around, playing together, and watching "It's the Great Pumpkin, Charlie Brown"


It was my favorite Halloween yet.
Posted by Megs at 2:55 PM 4 comments: