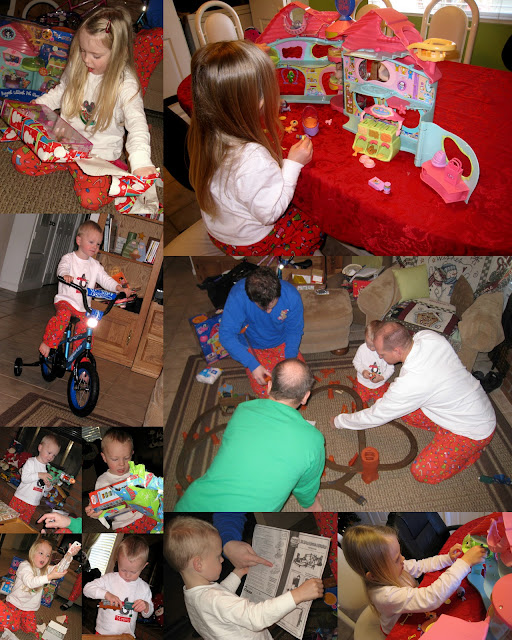 Christmas Morning 2010
*Disclaimer: although the guys did enjoy playing with Mason's new train set, this picture actually portrays how it took all of their skills to put it together!
Posted by Megs at 8:17 PM 1 comment: 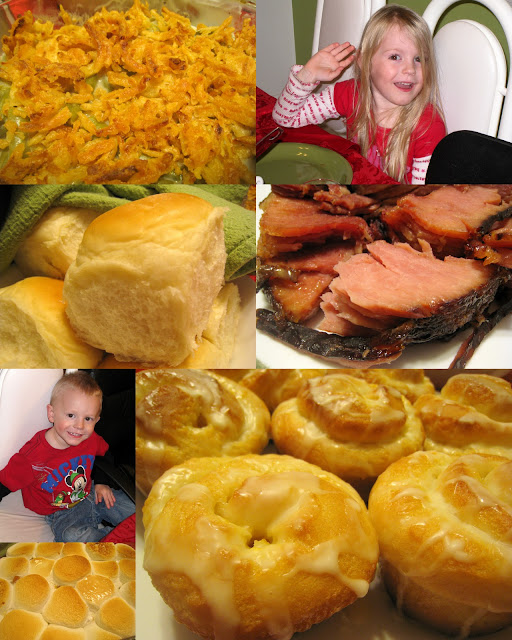 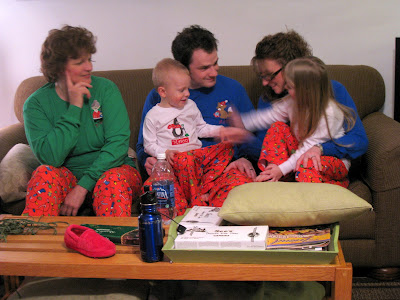 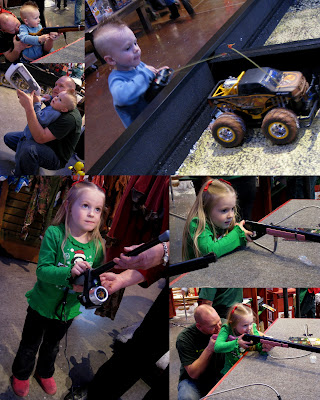 For previous Christmases, we've taken the kids to see Santa at the mall.  This year we decided to go pro.  Bass Pro Shops, that is.  I saw a flier that advertised the store's winter wonderland, including the free activities and free pictures with Santa.  So we invited my mom to come along, and we drove to Mesa.  The games that usually require quarters were all free: the Red Rider target shooting, the fishing and shooting video games, and the newly featured remote control monster trucks.  Mason was freaking out about those trucks.  Since we've been home, whenever we mention Santa, Mason says, "Santa has 'mote control monster trucks at his house!" 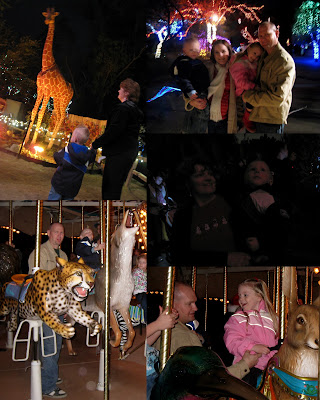 After seeing Santa and grabbing some dinner, we all went to Zoo Lights at the Phoenix Zoo.  The lights were spectacular, especially the big light show accompanied by music.  There was also a big interactive talking giraffe, which was probably the kids' favorite part.  I don't know where the guy doing the giraffe voice was hiding, but he could obviously see and hear the kids.  They stood there talking to him for a while.  And of course the kids rode the carousel before we headed home.  It was quite a magical evening. 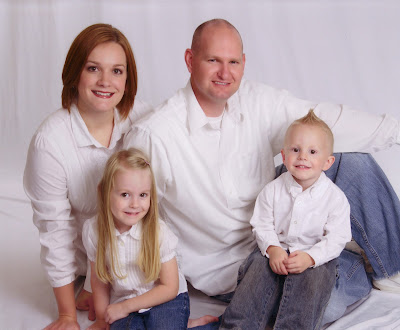 We had family portraits taken back in October, but it took us almost two months to pick them up! (it's quite a long drive)  So here they finally are.  We think they turned out pretty good. 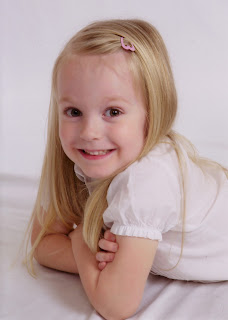 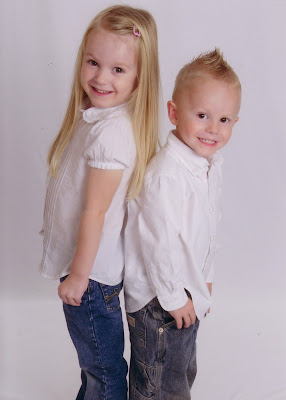 Are you drooling yet? 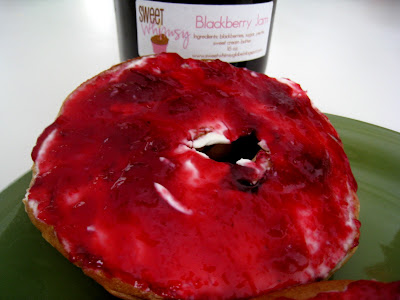 Lately Amy and I have been creating magic in the kitchen.  Last Monday we turned three flats of fresh blackberries into 21 jars of seedless blackberry jam.  I borrowed my mom's old juicer to prep the fruit and remove the seeds.  I have memories of that thing as far back as I can remember.  My mom would use the grinding attachment to grind wheat into flour for homemade bread, creating a flour cloud in the house.  In the summers, we'd go out as a family to one of the many humongous patches of wild blackberries along the river by our house.  I'd complain and get freaked out by the bees, but eventually we'd fill our buckets with berries and take them home for my mom to make jam.  So last Monday when I was running our berries through that old juicer, the smell took me back.  And when I tasted the finished product, I was that kid again.  I wasn't sure if it only tasted so delicious because of the memories associated with it, but when we sold all the jam by Friday, I figured it must taste pretty darn good to everyone else too. 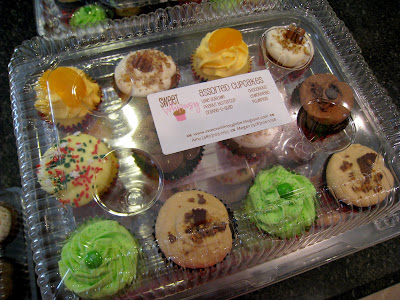 And then there are the cupcakes.  I don't mean to boast, but they are a huge hit.  After Amy's husband took some to work with him to share with everyone (along with some classy fliers), it really took off from there.  We've had a few huge orders, and last week we delivered assorted cupcakes to 11 different business around town, as Christmas gifts from another business.  Next week we're catering the local Taco Bells' Christmas parties (we provided cupcakes for their Thanksgiving party too).  And word just keeps spreading!  We're pretty excited about it.  And pretty proud.
Posted by Megs at 11:05 PM 5 comments: 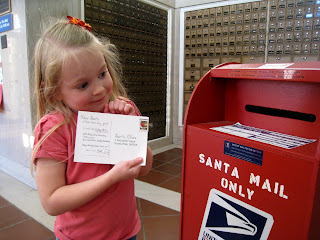 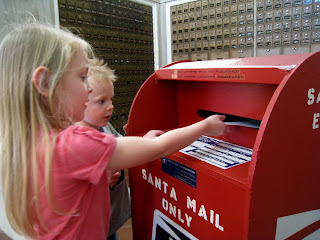 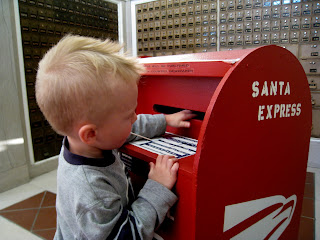 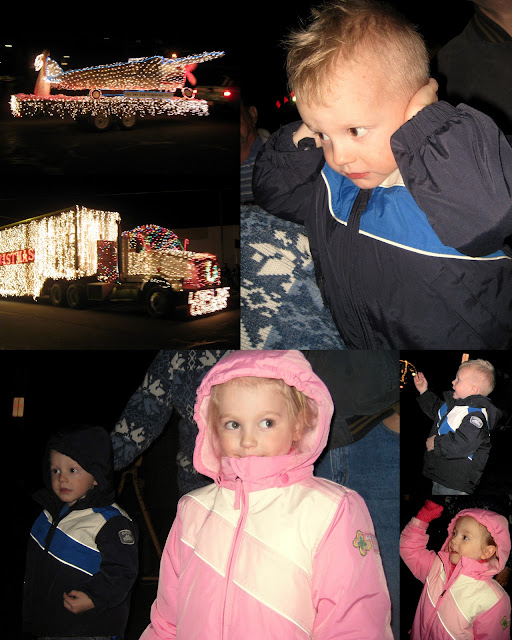 If you live in Globe, and you're not busy, you go watch the light parade.  Not because it will change your life, and not because anyone throws candy (Why don't they? What's a small-town parade without candy?), but because it's just what you do.  And the carol singers on the floats may not be to Mason's liking, and the air horn of the "Long Live Cowboys" truck may give you a heart attack, but the kids will get to see Santa riding on top of an old fire engine owned by the guy who runs George's Hamburger Shop down the street.  And everyone gets a kick out of that.
Posted by Megs at 10:50 PM 2 comments:

When it comes to the ward Christmas Social: 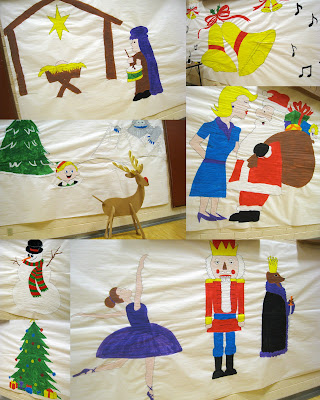 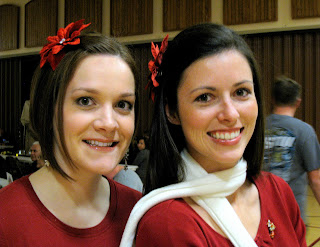 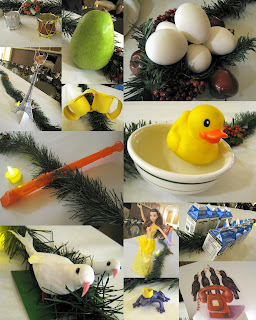