Today Mason and Bree got their fifth and final rabies innoculation. What?! Rabies? Did my children get bit by something rabid? No, but they did pet my parents' dog when it was covered in saliva after being attacked by a pack of wild dogs that COULD have been rabid. So the saliva COULD have infected my kids if they happened to put their fingers in their eyes/mouth/nose (which, let's face it, is what kids do). So my parents took care of the kids' first four shots (and also got the shots themselves, incidentally), and Chad and I took them today for their last one.

Bree was in tears all morning anticipating the shot, even with promises of candy and picking out a toy at the store afterwards. Everyone at the hospital outpatient center was extremely friendly and helpful (although Bree burst into tears when the RN came out in her scrubs just to talk to us about and issue with the doctor's order). When I took Bree back, the nurse had set up the room with a TV with "Little Einsteins" playing (I know for certain this was just for my kids since there were no other people there), she did the shot quickly (most of the tears were tears of anticipation), and then another nurse brought her a little stuffed giraffe, which immediately banished the tears. Chad took Mason in next, and he came out with his giraffe too. And Bree said, "I was pretty brave. I cried a little bit, but then it was over quickly."
Posted by Megs at 5:08 PM 2 comments:

Two hours at the zoo 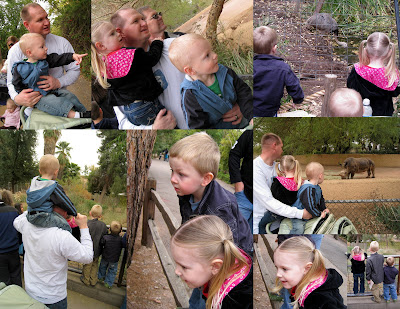 Two hours at the zoo may not seem like much. But I think it is the perfect amount of time to devote to walking around looking at animals with six kids under the age of seven. In two hours at the Phoenix Zoo you can see monkeys, elephants, giraffes, reptiles, ostriches, rhinos, birds, tortoises, lions, tigers, gazelles, foxes, wolves, and so much more. Two hours walking trails in overcast 65-degree-weather is wonderfully invigorating. Two hours is plenty of time for the kids to wear themselves out so they'll sleep on the drive home. It was two hours well spent with my kids, my husband, Chad's parents, and his sister Sydney and her family who were visiting for the week.
Posted by Megs at 4:32 PM 2 comments: 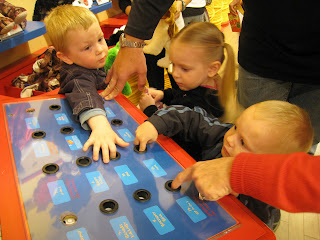 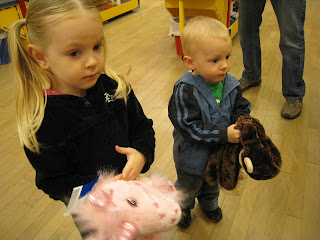 Step 3: Wait in line (the place was packed!)
Step 4: Stuff your animal to the desired huggability, and give it its heart and sound. 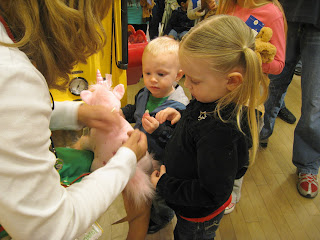 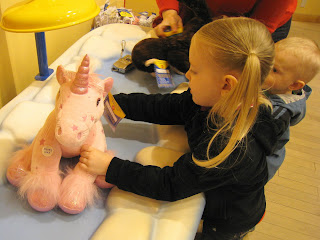 Step 5: Give your animal a "bath" to get rid of excess lint.
Step 6: Take your new toy home to love!
Build-a-Bear Workshop courtesy of Grandma Wallace
December 28th, 2009
Posted by Megs at 3:58 PM 1 comment:

Christmas 2009 in a Nutshell 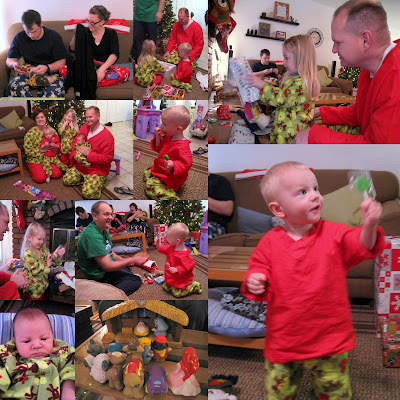 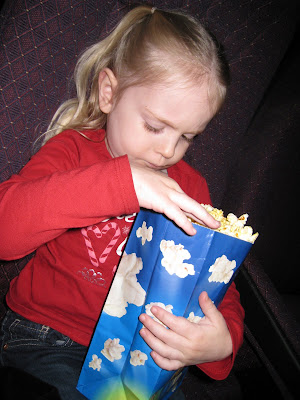 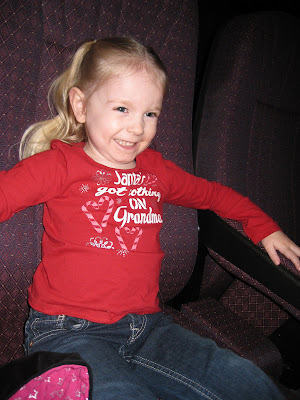 Bree and I went out just the two of us to see The Princess and the Frog at our new theater. She got to pick out any candy she wanted to smuggle into the movies, and she chose a bag of candy corn. She was all giddy with excitement, and the movie was very cute. Bree was jumping and dancing in front of her seat (thank goodness the theater was pretty empty and there wasn't anyone directly behind us) every time a song came on. It's hard not play favorites with my kids, but there are some things that are just for girls! 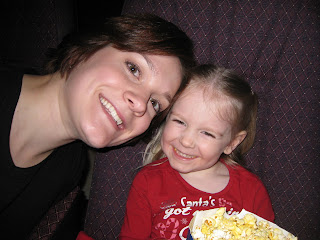 Email ThisBlogThis!Share to TwitterShare to FacebookShare to Pinterest
Labels: Outings

Stop filming and feed me! 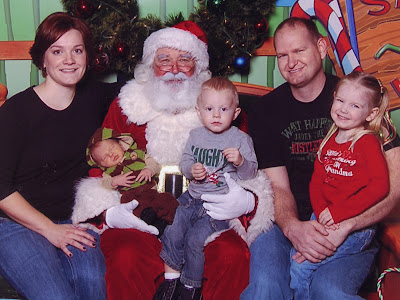 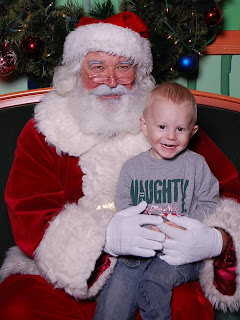 We had promised the kids a visit to Santa two weeks ago, but then I went into labor. We finally got a chance to go yesterday, and the kids loved seeing the real Santa. Mason can't talk much, but Bree eagerly told Santa what she wants for Christmas: a toy kitty (she originally wanted a real kitty, but I informed her that just wouldn't work out). Riley's not particular about his Christmas gifts. I told Santa all I want is a good night's sleep.
December 14th, 2009 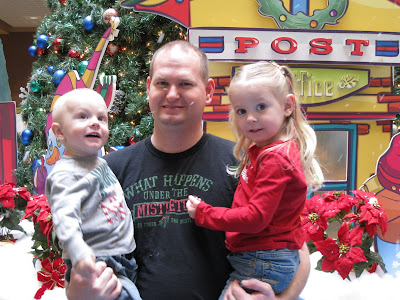 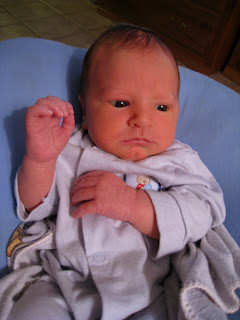 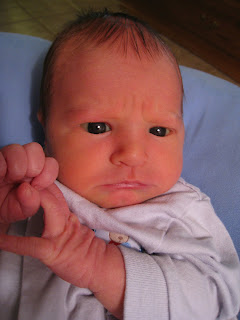 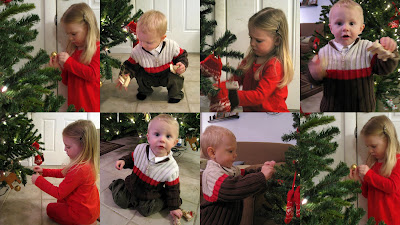 My third baby's birth comes with a story, unlike the first two which were routine and uneventful. On Tuesday, December 1st I had my 38 week OB appointment scheduled, and our family had planned to all go to the valley together to do some shopping and see Santa at the mall while we were there. But I was awoken at 6:30 with contractions that were 5 minutes apart, so Chad and I left the kids with a sitter and headed to the hospital in Gilbert. We had packed all the bags ahead of time, and consulted my list to make sure we had everything we needed. On the drive there, my contractions slowed down, and by the time I got into triage, they were 10 minutes apart, and I was only dilated to a three. So they sent me away, and told me not to come back until the contractions were 3-5 minutes apart and I was "huffing and puffing." Is it weird that I felt really embarrassed? I felt pretty dumb that I went to the hospital when it wasn't time yet.

So, anyway, since my mom was watching the kids, we had the day to ourselves, and I figured that by doing some shopping and errands around town I could get those contractions going again, and the long drive to the valley wouldn't have been wasted. So Chad and I went to breakfast, Walmart, Kohl's, Best Buy, Bed Bath and Beyond, Hobby Lobby, and the mall. We got some Christmas shopping done, Chad bought me some beautiful sapphire and diamond earrings in honor of our soon-to-be son's birthday, and I got some more yarn to crochet some hats that I sold at the Christmas Boutique at Country Kitchen. We ran out of things to do around 4:30, and my contractions, though still going, weren't getting any closer together. So we drove home.

Well, what do you thing happened once we were at home over an hour later? My contractions sped right up. Literally the minute we pulled into the driveway they sped up to five minutes apart again. I wasn't going to get over-excited this time. So I took a shower, and Chad and I went to the church building so he could play basketball with his buddies as planned, and I walked in the halls to make sure my labor continued progressing. By the time we left the church at 8:00 pm, the contractions were coming less than five minutes apart, and I was huffing and puffing. I was confident that it was time to go, and sure that triage wouldn't send me away this time. Well, as we were driving to the hospital, it quickly became apparent that we should have left earlier. My contractions quickly became long, frequent, and unbearable. My pain level surpassed the point where I had gotten epidurals with Bree and Mason, and I started to worry. I really wanted to make it to the hospital in time for an epidural. Then when we still had 10 minutes of driving ahead of us, I was fighting the urge to push, and I started worrying that we'd make it to the hospital at all. By the time we got the ER entrance, the contractions were so close together I couldn't even walk the 20 feet to get in the front door. The details are hazy, but I vaguely remember yelling in pain as I was quickly wheeled to a labor room, and I almost started crying when the nurse said I was completely dilated and there was no time for an epidural. But by this time I could barely fight the urge to push, and thankfully the doctor was there in a few minutes, and the baby was born a couple contractions later. I have never felt such pain in my life. Having a baby is always messy, but I at least felt like I maintained my dignity when I had the epidural drugs on my side. That was not the case this time. I screamed my head off, and it took all the nurses' coaching and everything I had to keep from freaking out, and focusing enough to push through the pain. I am so grateful that Riley came out quickly and easily, and it was over and I was recovering nicely before I knew it. So, now that I've experienced both, which do I think is better: epidural or natural?

Well, there are many pros with going natural:
Cons:

In summary, the pros of a natural childbirth easily outnumber the cons. But I'd choose an epidural every time.

The hospital stay at Mercy Gilbert was comfortable, and the nurses were very good. Sleep was hard to come by because I don't do well in a bed that isn't my own, let alone one that's lined in plastic. But the on-demand movies were awesome, and we watched a few while I either fed the baby or crocheted. I've been thankful that the recovery pain this time around has been minimal, and I'm feeling really well. And from the moment he was born, Riley has been a champion breastfeeder. Riley was circumcised yesterday, and then we were really ready to come home. My parents brought Bree and Mason to visit and to meet their new baby brother. They were so excited, and Bree was especially smitten. It's still surreal to have a third little baby. I have a family of five now, and I am loving being a mom to such beautiful kids. 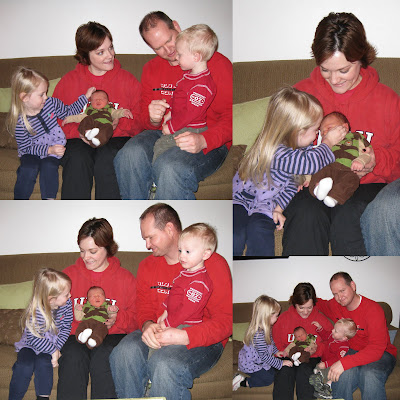 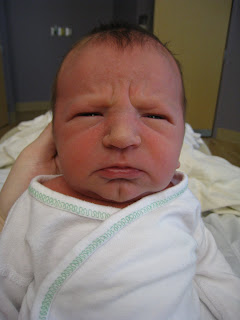 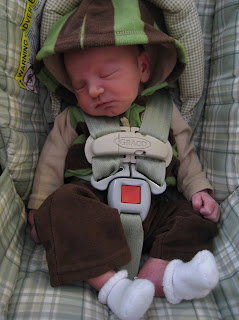 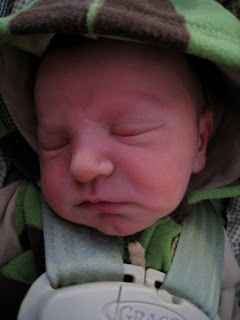