Bree: (after making an inappropriate bodily noise at the dinner table) "Sorry, I have gasoline."

Me: (watching Mason trying to maneuver something up the leg of his sleeper) "Mason, what's in your pants?"
Mason: "Well, it's my lightsaber, of course!"
Posted by Megs at 7:08 PM 5 comments:

Lincoln pulled himself up to stand at the coffee table today. I was reading bedtime stories to Bree and Mason, and heard a rustling sound. When I peeked over the book, there was Lincoln grinning at me over the edge of the coffee table, grabbing for the bag of microwave popcorn. He. Is. Awesome.

I've suspected for a while now that Bree has needed glasses. She is doing great in kindergarten, but she often squints or has to move her face really close to the book or computer screen. And since Chad and I both have had glasses since childhood, we weren't too surprised that Bree needed them too. 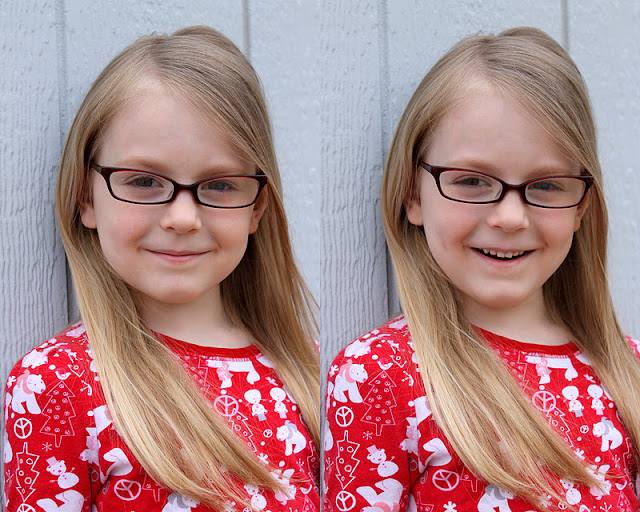 I was so nervous for her as the eye doctor was narrowing down her prescription. I know when I'm sitting in that exam chair I feel like I'm under huge pressure, trying to decide if "one" or "two" looks better, because heaven forbid I screw it up and end up with an incorrect prescription for the next year or two. But Bree did great, and the doctor was impressed. Bree's prescription isn't too severe, but she also has an astigmatism that has made it harder for her to see.

There wasn't a huge selection of frames to choose from, but I was relieved that she really liked these little red sassy ones. Her new glasses arrived Friday, and she's been wearing them from morning 'til night without complaint, so I'm thinking she's enjoying being able to see. Everyone we've seen since has showered her with compliments on her glasses, enough to ensure that her confidence in her appearance won't suffer. Not that I was worried too much there.
Posted by Megs at 1:36 PM 7 comments:

On Monday, Mason and Bree finally got the chance to spend the Christmas money they received from Grandma and Grandpa Wallace (our local Walmart has a small selection of toys on a good day, so you can imagine how barren the toy shelves were after Christmas). Bree came home with a big, beautiful selection of new Barbie clothes, and Mason bought a space station, astronauts and aliens to go with the shuttle set he'd gotten from Santa. They have been playing with their new acquisitions non-stop since bringing them home.

Yesterday Mason had one of the new astronauts in his hand when he came up to me as I was making dinner:

A visit to the Yellow Cottage

Chad had a few days off at the beginning of January, and we got to spent some time with Rob and Jaime. The kids seem to get along a little better each time we see them, which is nice, since they have no choice in the matter. And a lot of the trip revolved around them.

But there was plenty to please the adults too. We just didn't take tons of pictures (or they're on Jaime's iPhone). We played games, went to Maggiano's and Cheesecake Factory for date night (yes, two restaurants in one night; one for dinner, one for dessert), and ate a lot of good food. Chocolate Pudding Cake. Taco Soup. Mini Chocolate Donuts. Grilled Chicken Caprese. Lemon Bars with lemons from the tree in the backyard.

It was a nice little break, and we enjoyed seeing Rob, who was still on winter break from school. And who knows what our next visit will bring? Camping? A cruise? To be determined.
Posted by Megs at 7:22 PM 1 comment:

Lincoln is still so little and cuddly, it's hard to believe he's already nine months old. There are so many times when I'll look at him and think, "I HAVE to remember him at this moment." Just little things that he does that I find adorable or amazing simply because I'm his mother. I thought I'd write them here so I won't forget...
As I sat at the computer this evening, wondering if I had a recent photo of Lincoln to finish up this post, Bree said, "Look! Lincoln's crawling!" Chad and I were like, "Uh huh, that's nice," because we thought she must be referring to his scooting or pivoting skills. But when we looked over, Lincoln was actually crawling!

It's always a big deal when our kids reach milestones. But this milestone is a HUGE deal for Lincoln. Chad and I are so pleased. 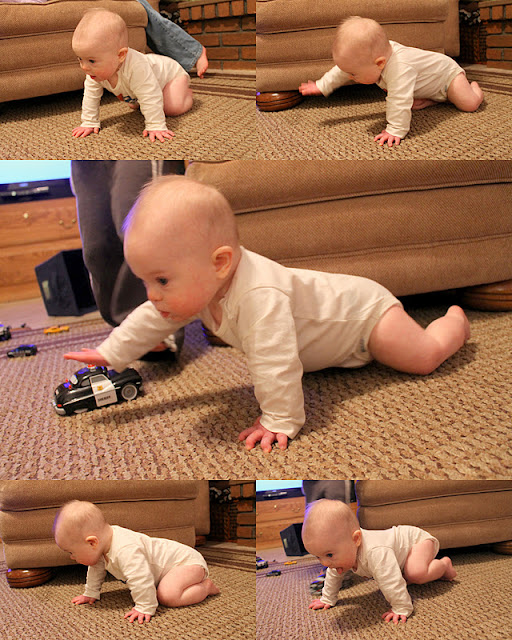 Of course, we can't take too much credit. Sure, Lincoln has therapists who visit us once a month and give us pointers on how we can help him progress. So we make more of a conscious effort to play with him in way that helps him get exercise. But I think it mostly boils down to the fact that I don't like carrying a baby around all day, and I let Lincoln fend for himself most of the time, so he has no choice but to take matters into his own hands (and knees).

That, and the fact that Lincoln is awesome.
Posted by Megs at 7:11 PM 5 comments: 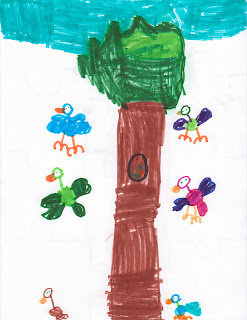 "It's a flock of birds."
The art Bree created for school today.
Posted by Megs at 11:04 AM No comments:

In an effort to make my 30th year one of the best years ever, and in lieu of making trite New Year's resolutions, I've adopted this idea from a couple friends of mine. I made a list of 30 things that I will accomplish in this, my 30th year. My goal is to complete the list by December 31st, and hopefully do a little learning and growing along the way. Here they are in no particular order:
And because I came up with more than 30 goals when I originally made my list, I narrowed them down. But I had trouble getting rid of ALL of them, so here are five more that I'll just call my bonus list, to tackle if and when I complete the first 30:
Some of these things will only take a few minutes to finish, some will take hours, and a couple will most likely take the better half of the year. I'm hoping all of them will make good memories.
Posted by Megs at 4:39 PM 2 comments: