I took the kids for a quick overnight visit at my parents' house this weekend. Just a chance to relax (for me) and run around outside with Papa (Bree and Mason). My dad took the kids on a black-light scorpion hunt, an "archeological dig," and a good old ride on the tractor. And my mom set up a cookout in the backyard. 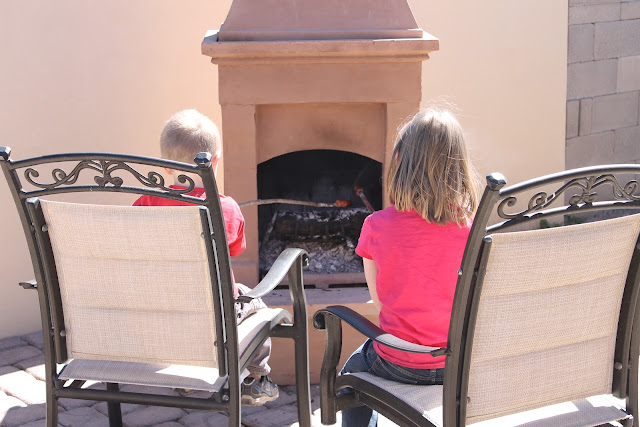 The kids roasted hot dogs and marshmallows for S'mores. 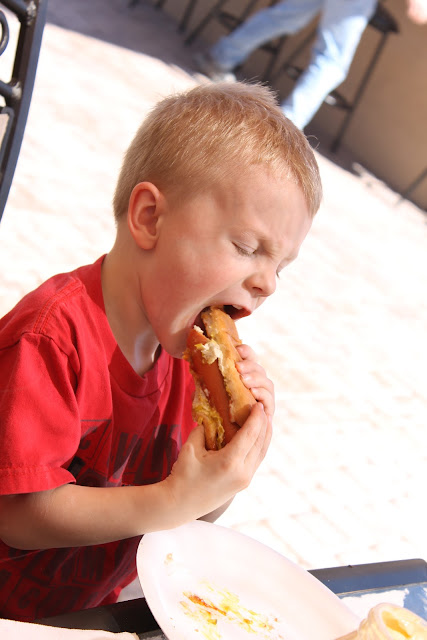 My grandparents joined us for lunch too, and my Arizona cowboy/rancher grandpa ate his very first S'more. He had literally never heard of them before. Amazing. Should have gotten a picture of that. Bree was distracting me. 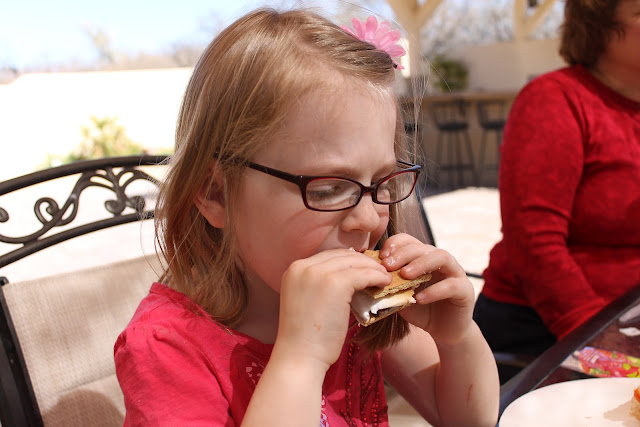 Lincoln is still a little young for a S'more, but he had his first ride on a swing, which he thought was pretty awesome. 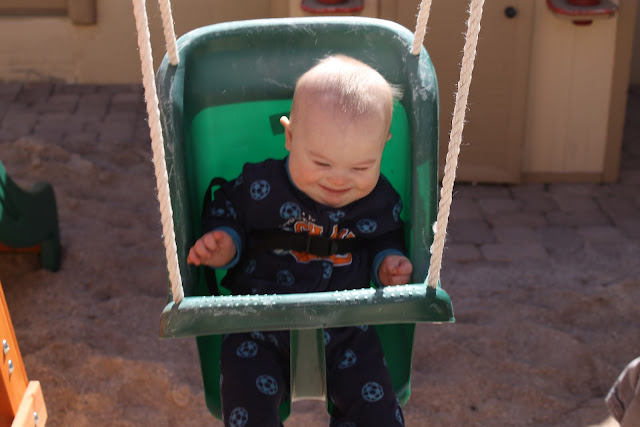 It was a gorgeous, sunny day, and a wonderful visit. 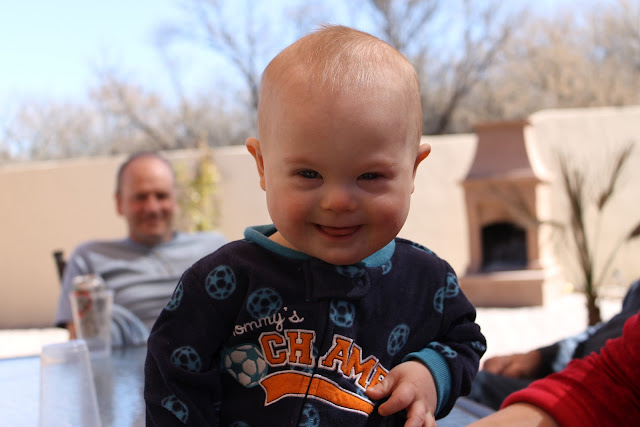 Chad and I both agree that, unlike several people we know, we are SO not defined by our vehicles. When we were married, Chad had a '91 Dodge Dakota (that truck introduced me to the term "4-banger" and its A/C cut out when driving uphill). I was driving an '88 Ford Thunderbird (its A/C didn't work at all... uh, A/C is very important when you live in the desert). I bought that T-bird out of a tiny used lot in Washington from a guy named Bart for $800. And it almost lasted me a year. Then there was the used Kia Sephia; we bought one with a stick shift to save money, and I hated it.


Then...we bought a new truck. A quad cab. With power windows. AND A/C that worked all the time. Compared to our previous vehicles, it was heaven. It has always run great, and has been a wonderfully reliable vehicle. It has taken us on road trips to Disneyland, on our big camping trip to Yosemite with our dog Ruby in the back, it moved us to Arizona... lots of memories.


But the minivan bug has been plaguing me for a while. Did I ever think I would be desperately wishing for a minivan? Um, no.


But that was before I was worn down by the hassle of squeezing three kids into the back of a midsize truck. Before I realized that there was no place to store all our junk on road trips except out in the exposed bed. Before I yearned for doors that would magically open with the push of a button, so my crazy 4-year-old could already be safe in the back seat while I buckle in the baby, rather than running around the parking lot (because standing still "right next to me, Mason" is impossible). 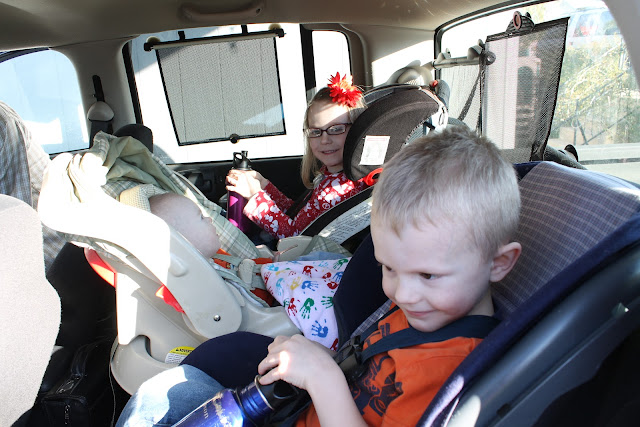 Yep, it's tight. And, let's face it, the gas mileage with that truck's V-8 engine is not great.


So I've been shopping for a while. And thanks to the tax return we just got, as well as Chad's recent promotion (Officer III) and concurrent raise, we were well equipped to take the plunge.


We said a tearful goodbye (on Chad's end...he was crying on the inside) to our beloved '04 Dakota . 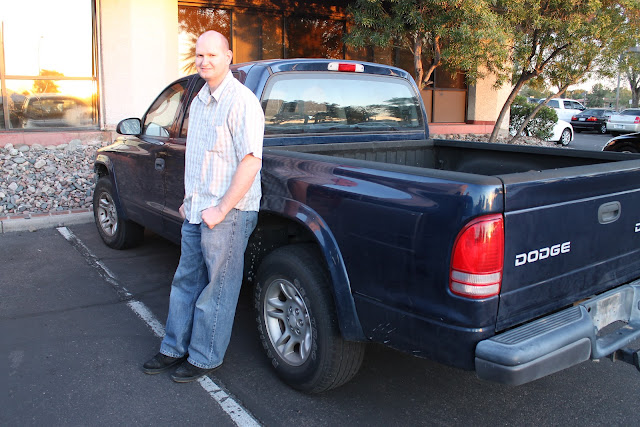 And said a giddy hello (on my end) to our 2012 Grand Caravan. Thank you Chad, for surrendering your truck for my convenience and comfort. 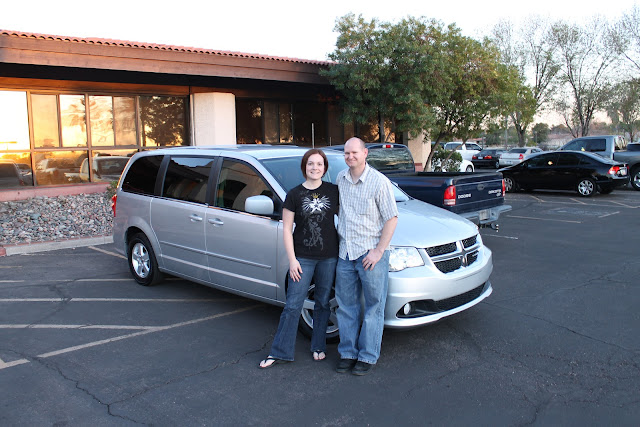 It is everything I hoped it would be. Quiet, smooth ride, considerably more gadgets than our truck, and oh, the magical sliding doors. Seriously awesome.

And though I may be sinning by invoking this quote in reference to a minivan:

"I love driving it. It is so choice. If you have the means, I highly recommend picking one up."
Posted by Megs at 3:37 PM 2 comments:

Chad has hated Valentine's Day ever since I've known him. Something to do with a high school incident, apparently. So I've never had high expectations for this particular holiday. Chad may not lavish me with surprises, but when he says to me, "Hey, you should schedule yourself a massage for Valentine's Day," I am more than okay with that. And yes, I did. And yes, it was wonderful. And yes, I gave him something too. And yes, that's private.

But Family Style Valentine's Days are the name of the game these days, with fun stuff our kids will get a kick out of. And I rarely turn down an excuse to make fun, delicious, holiday-themed food. So we ate Red Velvet Chocolate Chip Valentine Pancakes for breakfast. 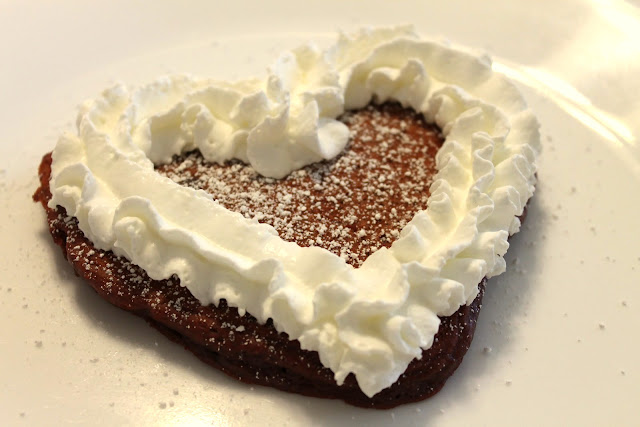 And we had chocolate fondue for dessert after lunch. 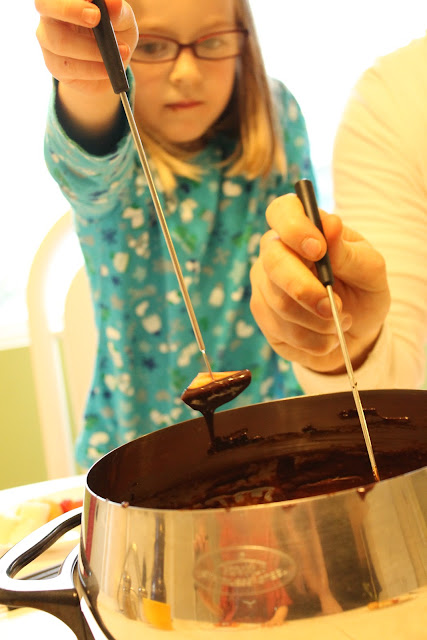 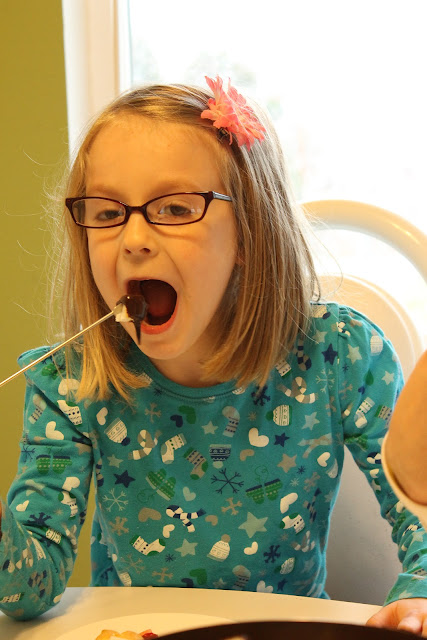 I didn't used to think fondue was a kid-appropriate activity, but Bree and Mason love it, so we indulge them. 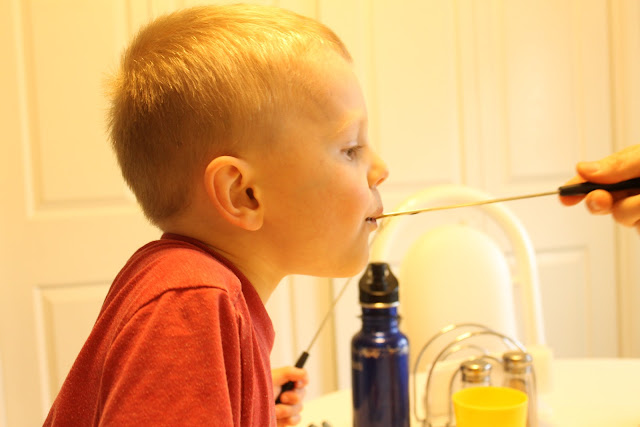 Although, we did have to confiscate the fondue forks after the kids decided to have a sword fight that drew blood.

And we were delighted when snow started to fall, heavy and fast during our fondue fest. The kids played outside until they were soaking wet with melted snow that disappeared as quickly as it came. 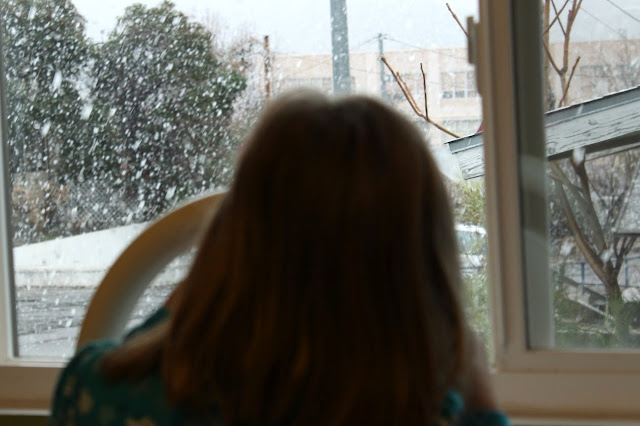 And that's how we do Valentine's Day family style.
Posted by Megs at 3:36 PM No comments:

Email ThisBlogThis!Share to TwitterShare to FacebookShare to Pinterest
Labels: Family

There's a potted plant in a basket on the top of our piano. Someone gave it to us after Riley died. I don't remember who gave it to us, but I do remember thinking that the last thing I needed was a beautiful plant reminding me of Riley. Because I knew that sooner or later (and probably sooner, knowing my track record with house plants) it would die from neglect.


Well, it is still there. Alive. Not thriving, of course. In fact, it is quite a miracle that it is still hanging in there at all. But what used to be four plants in one basket has slowly dwindled, and only one plant remains. I was afraid that watching it die would be one of the most depressing things imaginable. But that basket has come to symbolize something that I hadn't anticipated.


The plant reminds me of Riley, yes. And the task of watering has always been a little bittersweet. But the plant doesn't symbolize Riley, as I was afraid it would. Instead I've recently come to the realization that the reason the plant's slow demise doesn't bother me is because it actually represents my grief.


Grief, as I've learned, is not something you can ignore or bury. It's something that needs to be fluid, constantly ebbing and flowing, moving and evolving. There are times when I must let it completely wash over me, allowing myself to explore the depth of my grief, because only then can I watch the tide go all the way back out again.


Exactly two years have passed, and the waters of grief are relatively calm. The tide doesn't wash over me as often as it used to. And as the potted plant diminishes, so does my grief. It's still there. I still water it. But the plant is smaller, so the task is easier. So on this day I'm able to feel encouraged. Hopeful. And ready to keep going forward.
Posted by Megs at 10:27 PM 3 comments:

Mason has been going through what I like to call a mid-child-crisis lately. Basically, it involves a lot of whining when things don't go his way, the occasional swift punch to baby brother's stomach, a new ugly rubber-faced frown/grimace he pulls when he gets a scolding, and a lot of acting up whenever I sit down with Bree for school.  So lately we've been really focusing on giving our middle child some much-needed "Mason" time, to let him know how much we love our "big boy." Because he vacillates between wanting all the fun benefits big sister gets, and acting like a baby so he'll get as much attention as Lincoln. So we're trying harder to show him that he's got a pretty cool thing going too.

Turning four was a big step in the right direction. 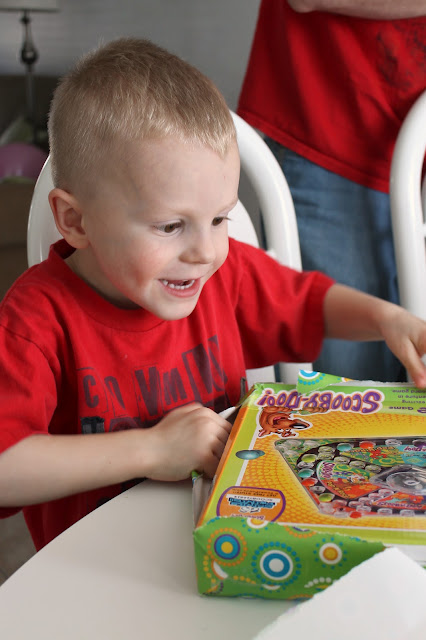 Because four-year-olds are big. Four-year-olds get dressed and brush their teeth on their own in the morning. They can even make their own breakfast. They can play Lego Star Wars all by themselves. And our four-year-old can be loving and kind to his little brother, making him laugh with raspberry-blowing an funny faces. He can play well with his big sister, even though her idea of playing Hot Wheels is pairing the cars up and marrying them off. He LOVES music and can sing remarkably on-key. He's got amazing hand-eye coordination and a great throwing arm. He can sing the ABC's clearly, where L, M, N, O, and P each make their own distinct appearance.

He loves all things boy, and the quiet little party we had reflected that.


Some awesome metal airplanes from my parents. Cash from Chad's parents. A Hot Wheels car from Bree.


All Mason really wanted for his birthday was a train cake with a "pointy thing" (cow catcher, if you will). 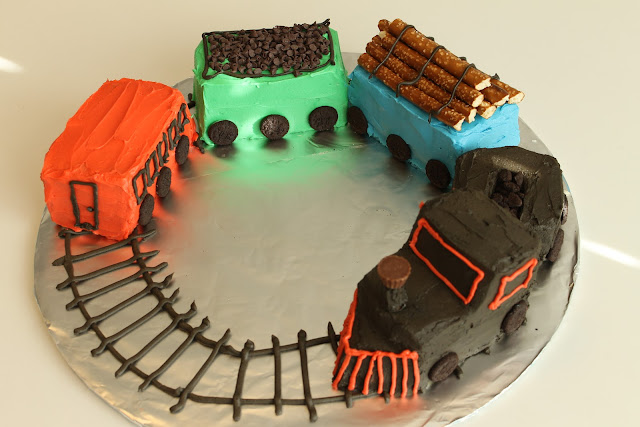 It was finished at the last minute, because illness had prevented me from getting it frosted ahead of time. So we literally cut it apart and ate it the minute I was done decorating. 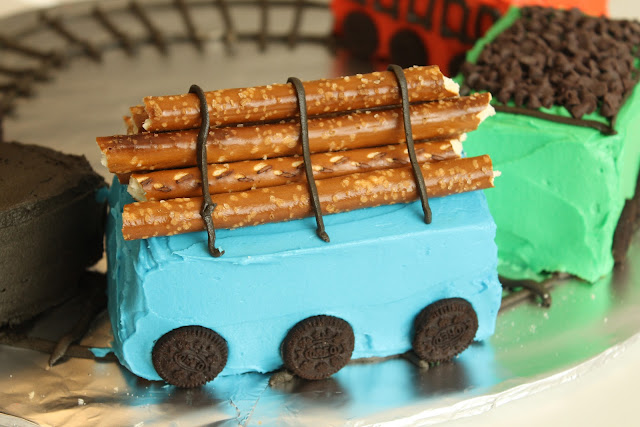 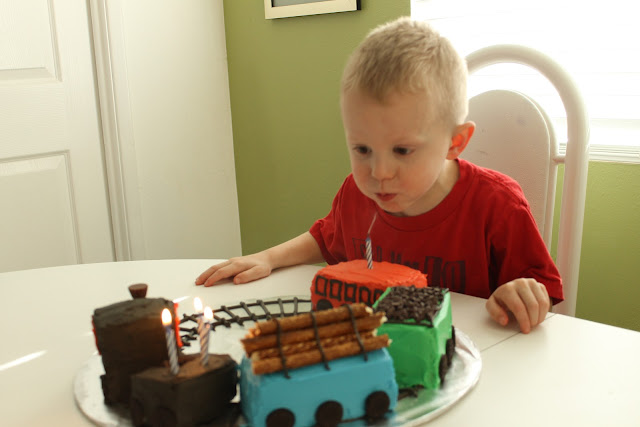 And he got to eat the "pointy thing" part of the engine. 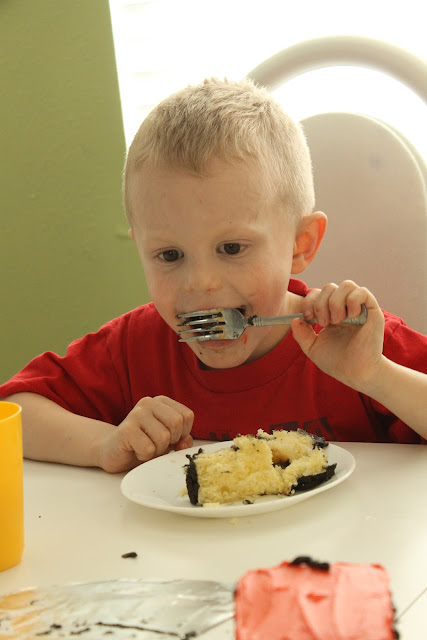