*Disclaimer: This post in no way means that I feel negatively about Lincoln's actual healthcare.  I trust and adore our P.A. Chad.  We've been seeing him since Bree was born, and wouldn't think of going to anyone else.  My reactions in this particular story are highly irrational, driven by raging postpartum hormones.

Thursday Lincoln saw Dr. Chad (he's actually a Physician Assistant, so we should just call him Chad, but that get's confusing at our house) for his second check-up.

At his 4-day-old appointment, Dr. Chad pronounced him healthy as can be.  He said we'll schedule an echo-cardiogram at two months to follow up on a slight tricuspid valve prolapse, but since murmurs among all newborns are common, we're not too concerned.  They weighed him at 6lbs, 8 oz, which is what he weighed at the hospital before we came home.  Okay, cool, see ya in a couple weeks Doc.

So when this Thursday's appointment rolled around, and the nurse weighed him at 6-8 again, I was like, "WHAT?  Weigh him again.  I mean, weigh him again, please."  So she did.  6-8 again.  This kid is three weeks old!  He was 6-15 at birth!  What the heck?  So Lincoln and I met with Dr. Chad, and the first thing he said was "I am not happy about this weight thing."  Of course, I automatically (and irrationally) took that to mean that Chad wasn't happy with me, since I'm the one responsible for this little person, and by extension his health and growth, and I experienced the deflating feeling of failure.  I'm thinking, "Okay, so I don't keep a rigid feeding schedule, but I'm pretty sure he's eating enough...I think he's eating enough...Oh no, I'm a terrible mom!"

So I get defensive and say to him, "But your scale was acting funny!  I swear!"

Then he talks about consistent growth chart percentages, and throws out the term "Failure to Thrive," and recommends I keep Lincoln on a rigid every-two-hour feeding schedule during the day to make up for the fact that my perfect little angel sleeps 7-8 hours straight at night.

And I'm trying to keep it together.

And I forget the things I was going to talk to him about during this visit.  Like getting the more sophisticated genetic test that can tell us which of the four types of Down Syndrome Lincoln has.  Or what else I have to do to get that next echo-cardiogram lined up.  Or the special growth chart for kids with DS that I had brought with me and forgotten in the car.  (Post-partum "mommy brain" is a legitimate thing.  Really.  And stir a little stress and heightened emotions into the pot, and my brain goes into emergency power-save mode, with no capacity for multitasking, recall, or critical thinking)

Then Dr. Chad says, "But otherwise he's absolutely perfect."  And he high-fives me like he does on every visit, says, "You got this, Mom," (which is something I always need to hear) and I let out a sigh/groan and I sport a look that says "I'm trying, at least."

So on the short drive home I hold back the tears.  But at some point during the day, the overwhelming worry about my kid who isn't, by medical definition, "thriving" gets to me, and I lose it.  I'm bawling.  Chad takes it much better than me, and says, "He's eating plenty.  We'll just keep it up, and he'll gain weight.  I'm not worried."  Which is okay, because I'm programmed to worry more than enough for the both of us.

So a couple days pass, and I decide to try to ease my mind a little.  I step onto our bathroom scale with Lincoln to do the math and get a rough estimate of his weight.  An 8 pound difference! Can Lincoln actually weigh 8 pounds?  Even allowing for a pound of error, I would still be happy with a 7-pound baby.

So then I get creative with the kitchen scale: 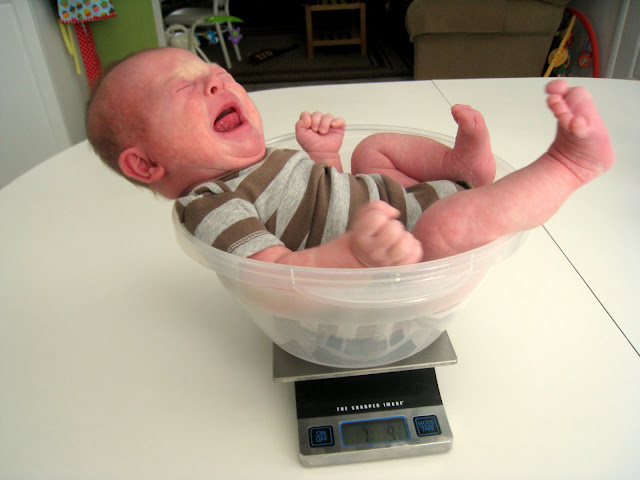 And I feel so much better.  I should never have believed it anyway.  I mean, those thigh rolls don't lie.
Posted by Megs at 3:19 PM

Email ThisBlogThis!Share to TwitterShare to FacebookShare to Pinterest
Labels: Growing Up, Special Needs

that weight thing happened to me once too, rayna was nearly 18 lbs (i think it was her 9 mo) at home, and when i took her in they insisted she was 12... there's no way!!! i insisted they weigh her again... same thing... so i said, weigh her with me on the big scale... 18 lbs... hmmm say the nurses (yes there were 2 by then trying to convince me i was wrong, seriously, couldn't they see her?!)... so they tried yet another scale, and finally got a decent weight. it's really frusterating as the mom!!! good job getting it sorted out.

and i LOVE the pic of lincoln's hands!

hee hee...you put Lincoln in a bowl. Creative moms are the most successful, I think. :) Good thing you've got that in your blood.

Yes, you are the best. You should call them and tell them about their dumb scale. Good job. That makes me just angry that they upset you so. I would have been upset too!

The fact that you got that picture is awesome. E-mail that to that dumb office!

Love, love, LOVE this. It's crazy how we, as moms, immediately start doubting ourselves and beating ourselves up over these sorts of things. I'm so glad you've proven what all of us already knew, that you're an awesome mom! Time for Dr. Chad to invest in a new scale.

Argh! So frustrating. Just trust your motherly intuition! :O) Also, I may or may not have put Charlie in a produce scale at the grocery store when hopefully no one was looking!

I had major scale problems... not with Zackary. With me. Two weeks before Z was born, the doc said they discovered their office scale had been off for months. I actually weighed an additional 8 pounds. 8 POUNDS! Are you stinking kidding me? Never trust the doctor's scale.

I love that you weighed him in a bowl!!!!! good job mom. you know your baby the best. and you are right Dr. Chad's scale was probably acting weird and someone hadn't zeroed it quite right! He's so cute!