We just returned from the Wallace reunion, a fun-filled week at Vallecito Lake in Colorado.  What does a Wallace reunion entail?  I'm glad you asked.
Lodging details: 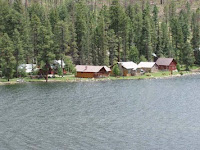 We stayed at the Croll Cabins, which are right on the lake-front.  The 24 of us took up two cabins.  The cabins may have been old, a little dirty, and the mattresses may have been as comfortable as plywood.  But that view!  The view was amazing.  The family spent hours enjoying the green lawn and soaking up the sun.  The water, the mountains, and the sunsets were beautiful.
Fishing highlights: 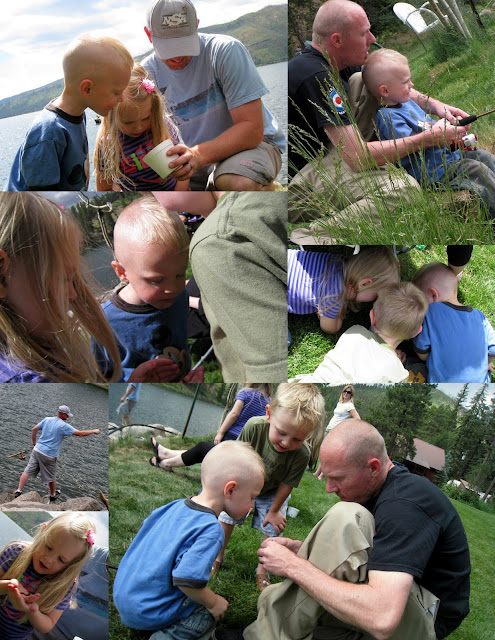 Well...there was a lot of fishing, but not many fish.  My six-year-old nephew Shea caught the only one that was kept and eaten.  Chad caught a few small ones.  I think the record-breaking heat may have had something to do with the lack of biting.  But the men were not to be discouraged.  They went through plenty of worms, trying to get a good catch.  Actually, I think they went through all those worms because the little kids kept taking them and playing with them.  Bree and Nathan played hide and seek with their pet worm for a while.  And Bree discovered that worms don't do well indoors.  At any rate, several worms met an early end at the hand of the preschoolers.  And the rest of them made a midnight snack for the local raccoons.  Oh, right, so, the fishing.  I know Chad had fun sitting in the boat with his brothers for hours on end.  The fact that they didn't catch anything is unimportant.
Grandma: 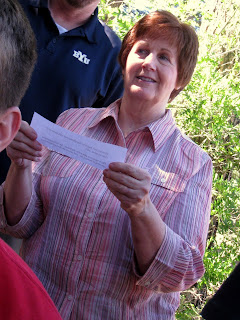 Fran wore herself out entertaining the grandkids.  She organized two separate treasure hunts, one for the older kids, and one for the younger.  She called Bingo for hours on end.  She cooked, cleaned, hugged, played, and acted silly for the kids' entertainment.  I don't know how she does it. 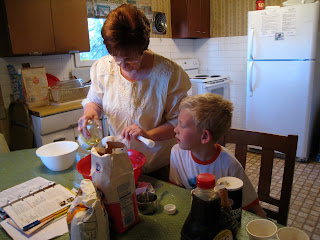 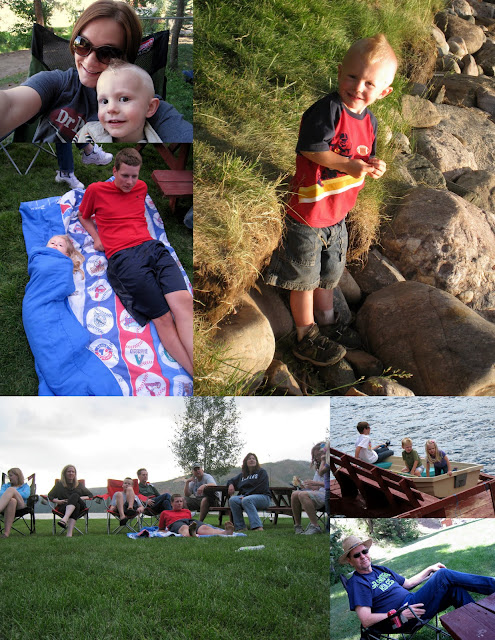 We spent a lot of time just doing nothing.  And when I say "nothing", I mean that the adults would try to relax while simultaneously keeping an eye on the kids, who were constantly running off, rolling in the poison ivy, falling down the cabin's stairs, standing too close to the water's edge, throwing rocks or sticks at each other, and not eating balanced meals.  Sheesh.  But we did have fun playing board games, doing puzzles, reading books, baking bread, and playing Family Feud.
Horses: 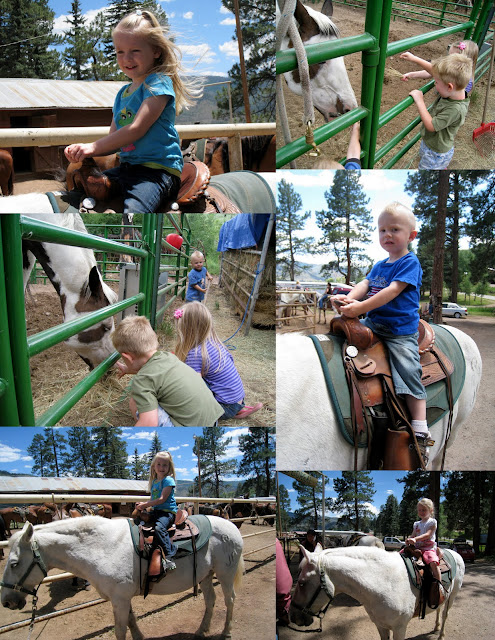 The kids had fun visiting the horses that were corralled behind our cabin.  And I took Bree and Mason to the big corral on the other side of the lake for "pony" rides.  Bree loves horses, and rode like she'd been doing it all her life.  Mason wasn't as steady in the saddle, and he was more interested in the tractors than the horses.  I took Bree again later in the week along with her cousin Nate.  He ended up being too nervous to ride, but it was definitely one of the biggest highlights of Bree's week.
The boat: 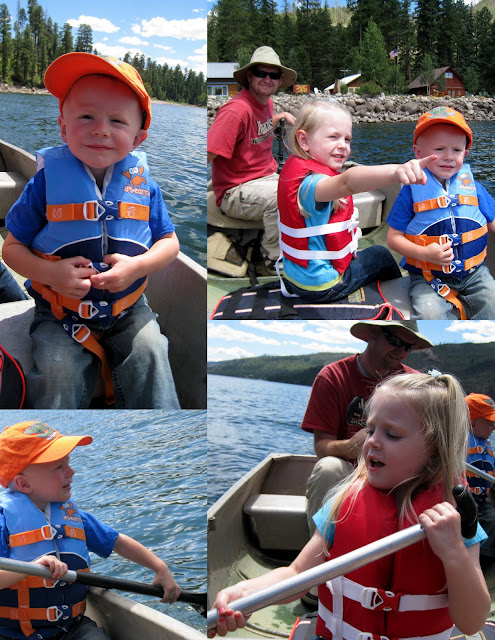 Chad's friend let us borrow his little boat for the reunion, and we drove to Colorado with it strapped on top of our Suburban.  The guys used it a lot for fishing.  But there were also a few rides just for the fun of it.  The motor was just a little trolling motor, so the boat didn't move very fast, but it was Bree and Mason's first time in a boat, and they thought it was pretty cool.
Mesa Verde National Park: 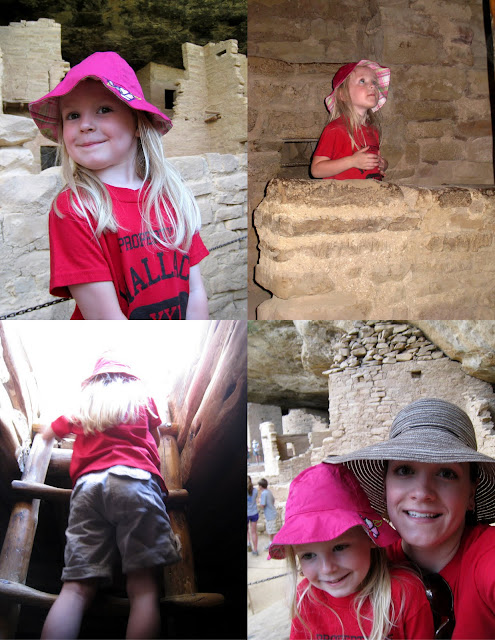 The first National Park established to "preserve the works of man" (Theodore Roosevelt).  Home to Cliff Palace, the largest cliff dwelling in North America, and almost 600 other cliff dwellings.  This was definitely my favorite part of the week.  We stopped first at the visitor's center, and purchased tickets for the Cliff Palace tour.  Then we drove to see the Spruce Tree House, which is a cliff dwelling just a short hike from the road.  We got to walk around where Ancestral Puebloans (formerly called Anasazi) made their homes almost 1000 years ago.  Bree and I climbed down a wooden ladder into a kiva, which was used for religious ceremonies.  The ranger there told us that Puebloan descendants granted permission for park guests to walk inside the kivas only after several inches of dirt were lain over the floor, so we wouldn't be desecrating holy ground. 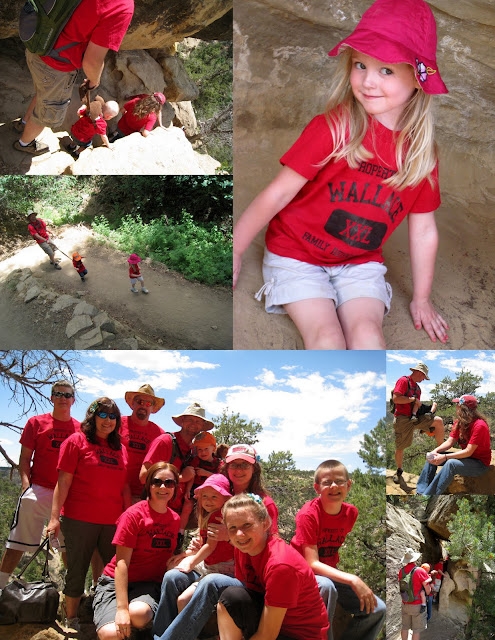 We went on a little hike after that, hoping to see some petroglyphs on the Petroglyph Point Loop Trail.  But we soon discovered that getting to the petroglyphs would require more of a time and energy commitment than we were prepared for.  We did have fun scrambling over and through interesting sandstone rocks.  And we enjoyed some gorgeous views.  We walked through the museum, which had a very impressive collection of artifacts uncovered throughout the park.  We saw ancient pots, baskets, seeds, cloth, sandals, tools, etc.  We learned how they date the dwellings by comparing the rings in the logs used in the buildings. 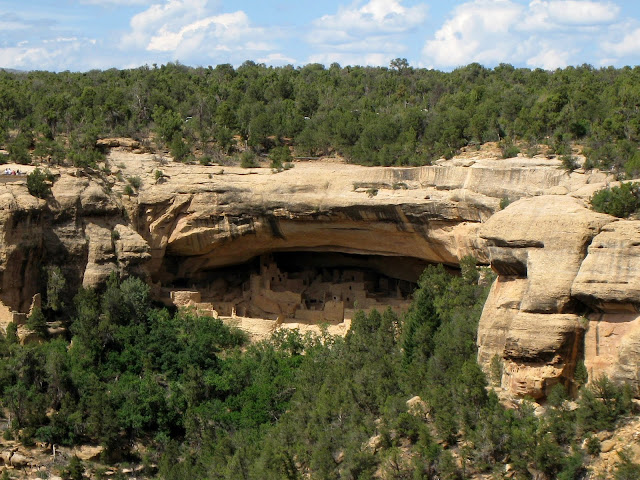 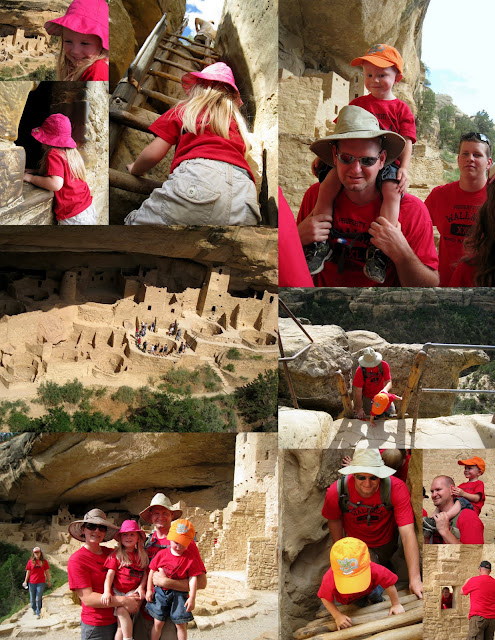 Cliff Palace was the highlight of the day.  This place is huge, with 150 rooms.  I've seen "ruins" before, but this was far beyond anything I expected.  I took the first picture as we drove around the Mesa Top Loop, and looked over the valley at the amazing view.  Cliff Palace was just one of several cliff dwellings that could be seen from that particular overlook.  The magnificence of that view couldn't be captured by photograph.  I live in an area of Arizona where a view of a mesa rising from the desert floor is not uncommon.  But add to that the sight of ancient stone dwellings built into natural alcoves in the sides of those cliffs...I can't explain it, but my brain wouldn't didn't want to believe my eyes.  It was magical and impossible and beautiful.  Actually walking through it, poking my head into a window of the tallest tower to see the cross-beams and painted designs on the interior walls, climbing up and down treacherous steps to access the dwelling, imagining what life was like for these amazing people...it was a once-in-a-lifetime experience.
Purgatory Lodge: 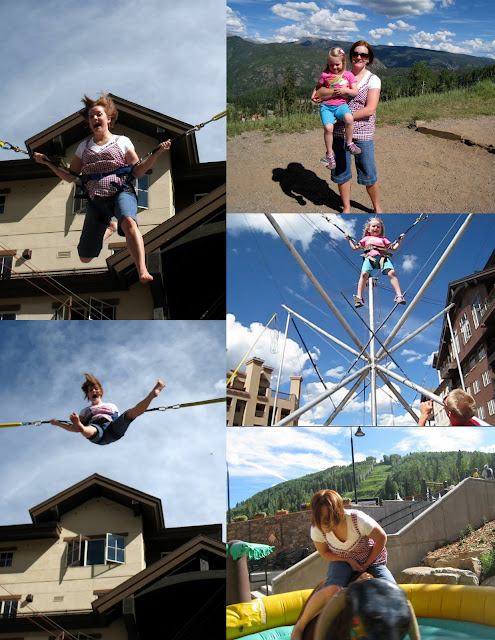 We spent some time at a ski lodge north of Durango, and had a blast.  Bree and Mason started off in the bouncy castle.  Then Bree, Chad, and I all rode the alpine slide (you ride the ski lift up the mountain, and slide down a chute in a little cart).  Then Bree and I each had a blast on the bungee trampoline, and I even did a couple of flips.  Then I felt like vomiting.  But that didn't stop me from getting on that mechanical bull.  Then my muscles were sore and I really felt like vomiting.  But it was so worth it.
Bar-D Chuckwagon: I had heard great things about this musical cowboy dinner show, so the whole family went.  We rode the little train around the place, then toured the little shops while we waited for our dinner.  I found a cute Christmas ornament for our tree to commemorate the vacation, per tradition.  We enjoyed sampling the confections from the chocolate shop.  Then we had to get Mason a toy train from the toy shop after he had a jealousy-coronary over his cousin's train.  Then we enjoyed our barbecue dinner, which was quite good, and were entertained by an extremely talented guitarist and his band.  Everyone's favorite song was "Old Matt Palmer had a Misfit Farm", which featured a lisping snake (hith, hith here), a dyslexic sheep (aab, aab there), a narcoleptic pig (picture a cowboy "asleep" with a microphone up his nose), and a foul-mouthed chicken (profanity was bleeped; it was a family show).  It was quite hilarious. 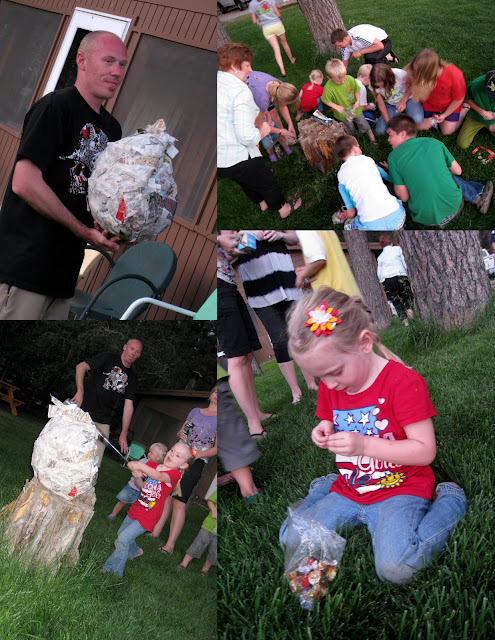 Sydney organized the making of the piñata.  She inflated the huge balloon, and let the kids drip flour glue all over themselves as they stuck strips of newspaper to it.  All was going well, and the piñata was drying nicely, until the balloon popped and the piñata shriveled.  But, not to be daunted, Sydney filled it with candy anyway.  It was too fragile to string up on a tree branch, so we just sat it on a stump and let the kids take turns whacking away.  Candy is always a big hit, no matter the means of obtaining it!  Then we headed back inside for Rachel's baby shower, and some family karaoke. 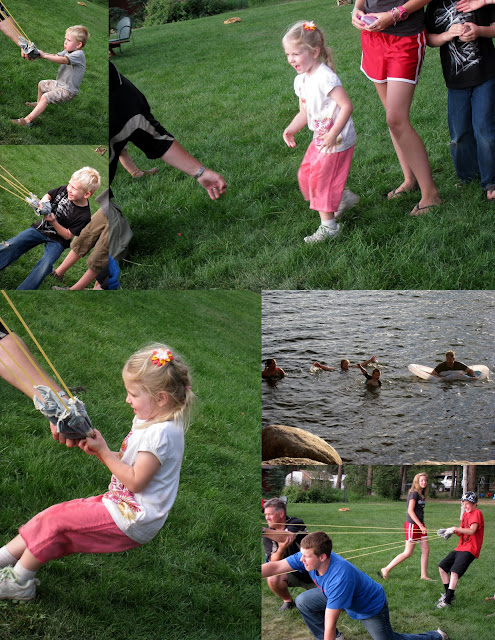 The kids had a blast shooting water balloons into the lake, trying to hit their cousins and Uncle Mike.  I'm sure the balloons were biodegradable and fish-friendly...at least no one reported us to the Colorado Division of Wildlife. 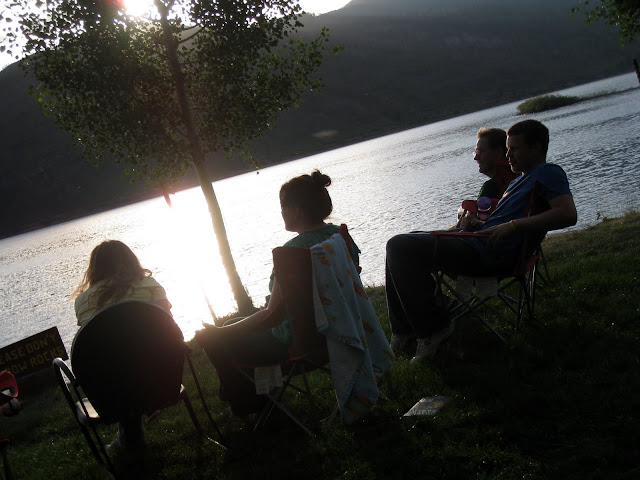 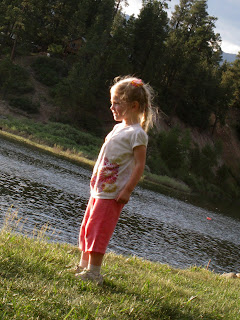 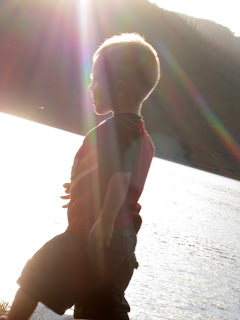 We watched the sunset, played some games, and spent a few precious last minutes with each other, knowing that being all together like this is a rare thing. 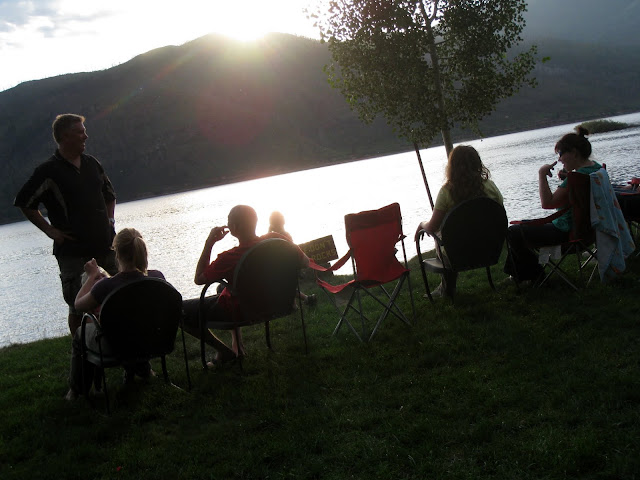 I wish I was a Wallace. This looks like so much fun!!!

Mesa Verde is incredible and you captured it well in your photographs.

It looks like Fran really outdid herself as grandma this weekend. Those could be the luckiest, most loved grandchildren in the world.

Dang you are good, Megan! I haven't even downloaded our pictures... it will have to wait until after Henry's birthday dinner and my homework. I LOVE your photographic eye - great photos!!!! Thanks for all of your arranging, researching and leg work. Love you!

Looks perfect! I'm glad you all had such a fun time. Great pictures!

Thank you for all you did to arrange our fun location in Colorado.

It was a dream come true for Daddy and me. Our hearts are full of love for our wonderful family.

You do take amazing photos!

God be with all my sweet family until we meet again.

Looks like a TON of fun, and GREAT pictures to prove it! The picture of the city under the cliff is amazing, it is hard to believe it is real! I'm glad you had a great time. Does Mason have a Mohawk? Awesome!

Ok, hold on. I vaguely remember you mentioning something Friday about someone having a mohawk. And then I said something about how mohawks make people cooler. I did not actually process that you were referring to your very own child - and now you have shot up about 10 degrees on my coolness scale. I LOVE MASON WITH A MOHAWK.