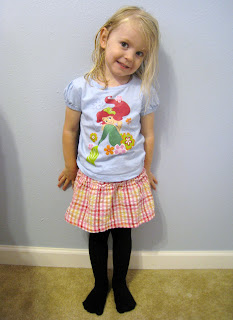 Here's how Bree dressed herself yesterday. It was a real chore to convince her that the black tights are only for church, and they're really only to wear in the winter time.
Chad went to work today. We've spent the past week worrying that he'd be forced to take an upaid 10-day furlough starting today because of state budget issues. The budget was supposed to be approved by midnight last night, but apparently there has been some sort of extension on the deadline, and in the meantime everyone in the public safety division gets to keep working for now. Chances are good that even when the budget gets passed, it will include a 5% decrease, causing cutbacks which will mean 10-day furloughs for everyone anyway. It is SO frustrating to be waiting like this! I am so mad at the legislature for putting this off until the last minute.
So, we don't know if we'll be able to go to Chad's sister Rachels' wedding next weekend. We can't make any plans. And those tickets for Wicked on the 18th...well, Chad might not be able to use his. Oh well. At least he has a job, and we are incredibly thankful for that.
Posted by Megs at 3:09 PM