Who needs the Geek Squad?

A little while ago our computer started turning off randomly by itself, and then wouldn't power up at all.  I was justifiably peeved because the warranty on this PC had literally expired one week prior to the start of the problem.  Dell's support center was not helpful, but no surprise there. I really just wanted them to confirm what I (and my computer-genius brother Adam) suspected was the problem.  Anyway, I did some research and some asking around, and decided that I was going to fix my own computer.  Kind of a big deal for me.  Adam recommended NewEgg.com as a great place to order computer parts, and I found what I needed: a new power supply unit.  (Apparently those things go bad all the time.  You would think one would last more than a year.  But whatever, Dell.)  So I ordered the unit, and today it arrived.
Isn't it beautiful? 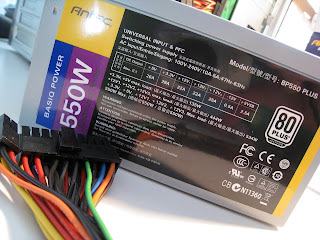 Then I looked in my computer. 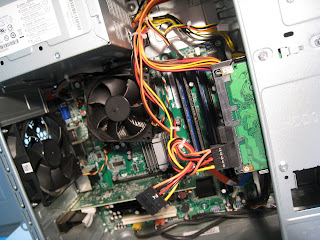 The inside of a computer can look pretty intimidating.  I know I freaked a little.  There are a lot of crazy wires and high-tech things in there.  But there was no turning back.  A few screw-turns and cable connections later I was done.  I cannot believe that little bit of labor would have cost me at least $60 to have someone else do!  And here I am blogging, using the very PC that I just fixed!  The new PSU works wonderfully and quietly.  And I now have 200 more watts of power than I had before to cover all my bases.  To quote Adam in his last text to me, "It's a great feeling knowing you got into the guts of the beast and came out victorious.  Plus your friends will be impressed."  Love it.  And love having my computer back!  I need to do some serious catching-up on a few shows.  "Ugly Betty," "Lost," here I come.
Posted by Megs at 6:45 PM

Come on, Megan. Do you have to do everything! Even the poctires are intimidating.
Love, Mom Fran

I'm not surprised in the least. She is not only beautiful, she's brilliant like her mother!

Wow! I'm so glad to hear from you, Lavita, You are right. Megan is amazing just like her Mama!

I wish I was half the woman you two are.

You, Meg, are a Renaissance woman to be sure.