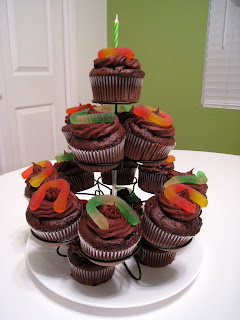 I can't believe he's one already! I thought Bree grew up fast, but time goes even faster with two. At 12 months, Mason is healthy, is walking like a pro, and loves being outside. He babbles a lot, but doesn't say anything except for mama and dada (and even then, he doesn't really know what that means yet!), and occasionally something that sounds a little like "hi."

We had two little celebrations for him, one with my Mom on Sunday evening (where he made a chocolaty mess with his birthday cupcake), and one with some friends on Monday evening. I decided on cupcakes since we were having cake twice, and also because they're great for portion control (I only had 1 1/2...somehow stopping at one is really hard!). They were so moist and delicious; I used my cake mix bundt cake recipe with mini chocolate chips, and delicious butter cream frosting. After pizza dinner, while the kids terrorized the nursery, the adults played games. I think Mason had a great time. 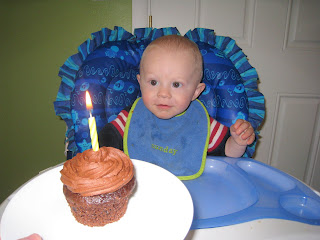 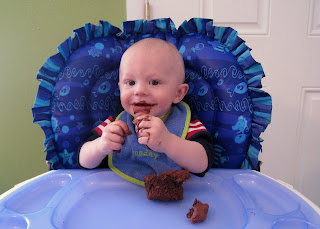 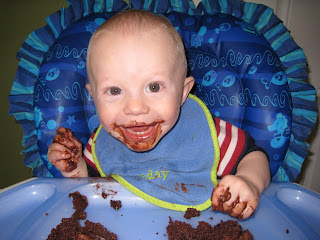 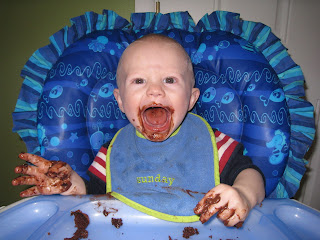 Email ThisBlogThis!Share to TwitterShare to FacebookShare to Pinterest
Labels: Growing Up, Holidays

Happy Birthday to the cutest one year old I know!! LOVE YOU!

Happy Birthday Mason! Wow, I can't believe he's already a year. It does go so fast!

That cupcake tower is so adorable. And I love the gummi worms. I hope he had a wonderful birthday. Miss you guys!

Wow! That went fast! He is so cute! And that valentine video is adorable as well!

I want a cupcake!
I think I have a picture of Chad on his first birthday that looks exactly like Mason devouring chocolate cake.